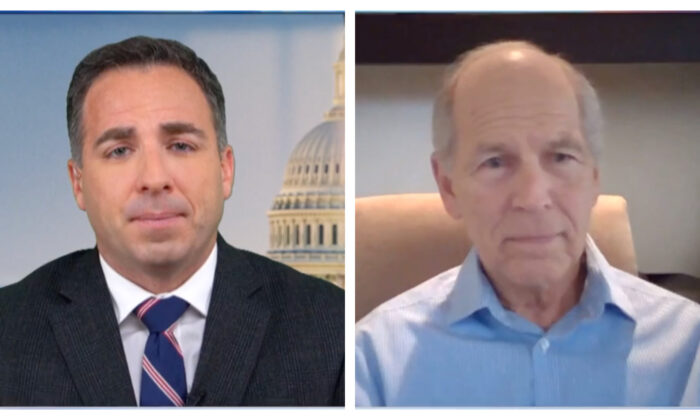 Robert Genetski in an interview with NTD's "Capitol Report" broadcast on Jan. 15, 2022. (Screenshot via The Epoch Times)
Economy

Robert Genetski: Inflation Could Be ‘A Lot Higher’ in 2022 Due to Strong Spending

Inflation has already hit an almost 40-year record high of 7 percent. But Robert Genetski, one of the nation’s leading economists, said that in 2022 inflation will still be a problem and maybe even rise higher due to too much liquidity and continued strong spending.

“I don’t believe it has [peaked]. We’ve seen this 7 percent rate, and that could be the high, at least for the moment,” Genetski told NTD’s “Capitol Report” on Thursday. “But as we go through next year, my expectation is that inflation is going to still be a problem. I think it’s going to be at least 5 percent. It could be a lot higher.”

On Wednesday, the Labor Department reported that the Consumer Price Index (CPI), which reflects inflation from the perspective of end consumers, rose 7.0 percent in the 12 months through December, a historical high since 1982.

On Thursday, the Labor Department reported that the Producer Price Index (PPI), a measure of wholesale prices for goods and services, jumped 9.7 percent for the calendar year 2021, a record high since the data was first calculated in 2010.

But compared to November, the December PPI increase was only 0.2 percent, the slowest in a year and a half. Genetski said that is a good sign, meaning some of the supply pressures are easing.

But “the challenge is going to continue to be a very sharp increase in spending in the economy” in 2022, Genetski predicted.

That is because the Federal Reserve has created a lot of liquidity and continues to put more money into the system, Genetski explained.

During Tuesday’s Senate hearing for his second term appointment, Federal Reserve Chairman Jerome Powell said the Fed would be “raising rates over the course of the year” to prevent excessive inflation. Still, he reiterated that he expected rates to remain low even after the hikes.

“My judgment: I think the Fed is going to continue to move too slowly,” said Genetski, one of the nation’s premier interest rate forecasters according to the Heartland Institute.

Genetski pointed out that the Fed hasn’t even begun to apply monetary restraint, and Fed itself admits there’s a year or two-year lag between what they do and what happens to inflation.

“Finally, the Fed will probably overreact because it’ll appear as if nothing they do is going to contain inflation. And when that happens, the Fed usually raises rates enough to hurt the housing market and the economy,” said Genetski.

“I don’t expect them to do that until either late this year, maybe after the election is over, or at the beginning of next year. So I think we might have one more good year in terms of spending, but unfortunately, one more year in terms of pretty high inflation.”