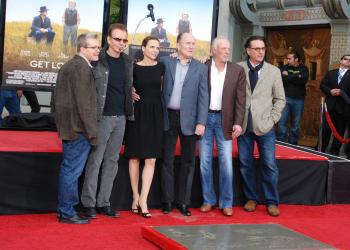 By Cheryl Casati
Print
Hollywood, CA—Robert Duvall was honored with a hand and footprint ceremony on January 5, at Grauman's Chinese Theatre in Hollywood to “celebrate his 50 years of excellence in film.” Despite the chilly overcast morning, the press and many onlookers came to see Duvall's ceremony. Previously, he received a star nearby on the Hollywood Walk of Fame on September 18, 2003.

Robert Duvall is a consummate veteran actor and director. One of Hollywood's best, he has starred in such movies as “The Godfather,” “Colors ,” “The Scarlett Letter,” “The Natural,” and “Apocalypse Now,” to name a few performances in his long and illustrious career.

Duvall was flanked by friends and fellow actors such as James Caan, Billy Bob Thornton, and Andy Garcia.

James Caan opened the ceremony with a quip that brought laughter. “Thank you for coming to the auction, actually for coming up to honor one of the finest. It doesn't get any better than Bobby Duvall.”

Caan shared that before he had been an actor he was in rodeo for a bit, “Another non-Jewish activity.” He joked. He set the tone for the entire event—relaxed, humorous and deeply, genuinely respectful—quite a mix.

Billy Bob Thornton stepped up to the podium next, he reminisced about when he and Aidan Quinn were in a movie with Duvall close to 20 years ago. They both missed their cues. Director James Keech called “cut” and said, "Hey guys, where are you, you're supposed to come in and get Bobby.” Thornton went on to say, “Well we'd gotten so mesmerized by listening to Bobby's monologue we forgot we were really in a scene with him.”

“I've always loved him, so thank you again for being here for him” concluded Thornton.

Cuban born Andy Garcia teased Caan for the role he played opposite him in the Godfather. He was the final actor to laud Duvall prior to his hand and footprint ceremony.

“He's (Duvall) a great hero of mine.” In Garcia's first film with Duvall, he had hoped to “get a chance to rub up against him and talk a little bit about acting and that would make the whole trip memorable.” “Bobby searched me out and then I said, ‘It's an honor to meet you Bobby, you're an inspiration to me.’”

“Then Bobby said ‘Yeah, yeah, yeah—when you do the mambo do you break on one or break on two?’ I said you break on two. We talked about the mambo for about 3 hours. I couldn't get a word in about acting. To this day all we talk about is the mambo!”

"Duval has been a barometer for every actor to aspire to." added Garcia.

A huge ovation welcomed Duvall, who was chipper and candid. He joked about his wife being two decades younger than him.

“Great to be here, these guys are great speakers, great to be with Bill Bob Thornton, I call him the hillbilly Orson Wells” joked Duvall.

“I think I'm putting my foot in it (the cement) on my birthday. It's also my wife Lucia's birthday, we're a few decades apart” he said.

After sticking his hands and feet in the cement, the crowd spontaneously sang "Happy Birthday" to Duvall and his wife, Lucia.