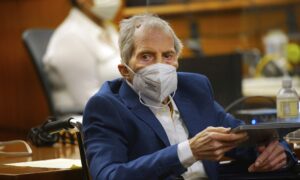 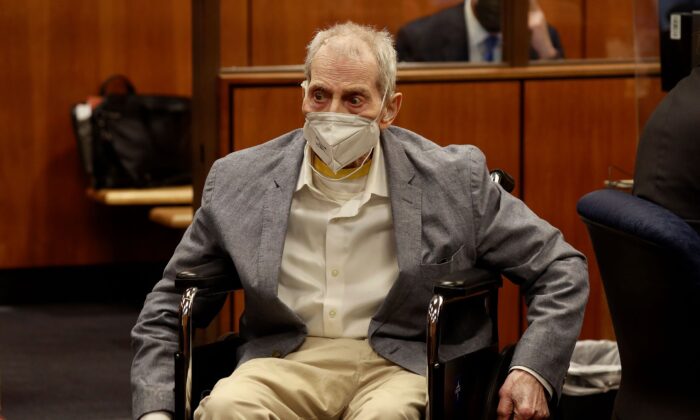 Robert Durst in his wheelchair as he appears in an Inglewood courtroom with his attorneys for closing arguments presented by the prosecution in the murder trial in Inglewood, Calif., on Sept. 8, 2021. (Al Seib - Pool/Getty Images)
US

Robert Durst, a New York real estate heir and multimillionaire, was sentenced on Thursday to life in prison without chance of parole for the murder of his best friend in California more than two decades ago.

The 78-year-old Durst was convicted last month in Los Angeles Superior Court of first degree murder in the death of Susan Berman. Berman, the daughter of a Las Vegas mobster, was Durst’s longtime confidante.

The Los Angeles jury found he was guilty of having shot Berman, 55, in the back of the head at her Beverly Hills home in December 2000. The jury had also found Durst guilty of the special circumstances of lying in wait and killing a witness, which carries a mandatory life sentence without the possibility of parole.

Prosecutors said that Durst had sought to prevent Berman from incriminating him in the reopened investigation of the disappearance of his wife Kathleen McCormack, who went missing in New York in 1982 and remains missing.

Prosecutors alleged Berman had provided a false alibi for Durst when Kathleen went missing, and that Berman, before her death, was prepared to tell police how she helped cover up Kathleen’s killing.

Durst was never charged in his wife’s disappearance.

Durst, who has numerous medical issues, on Thursday was rolled into the courtroom in a wheelchair. The trial began in March 2020 and was adjourned for 14 months amid the COVID-19 pandemic. It resumed in May with the jury that reached its verdict on Sept. 17.

Superior Court Judge Mark Windham, who pronounced the sentence Thursday, denied a request from the defense for a new trial. He said that there was “overwhelming evidence of guilt” proven many times over.

Durst is the grandson of Joseph Durst, who founded the Durst Organization, one of New York City’s largest real estate companies. His father, Seymour, took charge of the company and later handed control of it to Durst’s younger brother, Douglas. Robert Durst settled his share of the family fortune and was estimated by prosecutors to have $100 million.

Prosecutors had also argued that Durst, in addition to having killed his wife and Berman, also killed a neighbor in Galveston, Texas, in 2001. The neighbor, Morris Black, had discovered Durst’s identity when Durst was hiding from law enforcement, prosecutors said. Durst was acquitted of the Texas man’s murder after he testified that he had shot Black in self-defense, despite admitting to having dismembered the man’s body afterward.