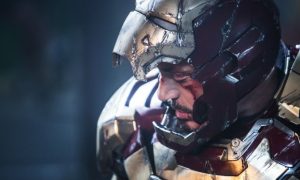 While Robert Downey Jr. has been the face of Marvel’s Avengers films, he might also become a regular face among Hollywood’s richest actors.

The 49-year-old grabbed the top spot on Forbe’s list of highest paid actors, earning about $75 million, the same amount he made the previous year.

His success largely stems from his roles in Marvel’s Iron Man and Avengers films.

The films so far have collectively earned a whopping $4 billion worldwide.

An Avengers sequel is set for next spring.

As a writer for Forbes put it, “Downey reigns…because at this point, it would be incredibly difficult for Marvel to continue making Iron Man and Avengers films without him.”

And, its a good time to be a superhero.

Downey Jr.’s costar Chris Hemsworth, who played Thor in the Avengers series, came in at #5 with $37 million.

Forbes determines the salaries based on how much each celeb earned for entertainment related work between June 2013 and June 2014.

He starred in the box office hits The Great Gatsby, and The Wolf of Wall Street.

At #3 is Oscar nominee Bradley Cooper with $46 million for his roles in American Hustle and Silver Linings Playbook.

And, at #2 with $52 million, is Dwayne Johnson, who recently ventured in television.

‘The Rock’ is producing and starring in the upcoming HBO comedy, Ballers.

As for Hollywood’s highest paid women, the list has yet to be released.

But, if last year’s list was any indication, the Los Angeles Times points to a stark paygap in Hollywood’s salaries.

To check out who else made the top 10 list, head over to Forbes.