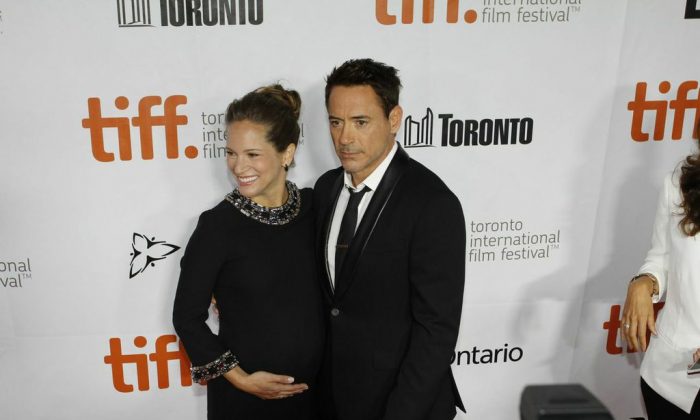 TORONTO—Susan Downey and Robert Downey Jr. can’t image working without each other on films. During the press conference for their latest drama “The Judge,” Susan Downey said that their collaboration on films helps them both make a good work schedule and maintain a harmonious relationship.

“He’s my favorite person to work with,” Susan Downey said at the press conference for the film on September 5, 2014.

Robert Downey Jr. played one of the lead roles in the film, a the lawyer son of a Judge (Robert Duvall). While the relationship between the two is more than strained, Downey Jr. is put in a situation where he has to confront his past and therefore his father.

The actor, however, also took on the role as executive producer, while his wife was the producer.

Co-star, Vera Farmiga said that the two have such a great relationship, that it benefited the cast and crew around them.

“There’s this infectious joy that stems from their relationship,” Farmiga said. “The symbiosis, the love, there this great trickle down effect that blesses everyone,” she said at the press conference.

More than just working together on big titles, the Downey have now started their own production company—Team Downey.

“I think your company is going to be amazing,” agreed director of the film David Dobkin about Team Downey. According to IMDb, Team Downey has 10 in-production titles in at the moment.

Dobkin commended the couple on jumping on “The Judge” project and committing themselves to it.

“I don’t think anyone would have backed me in making this movie with as much enthousiams and trust,” Dobkin said about the Downeys.

“They have that joie de vivre, and spirit,” he added.

Robert Downey Jr. married Susan Downey in 2005, and the two are expecting their second child.