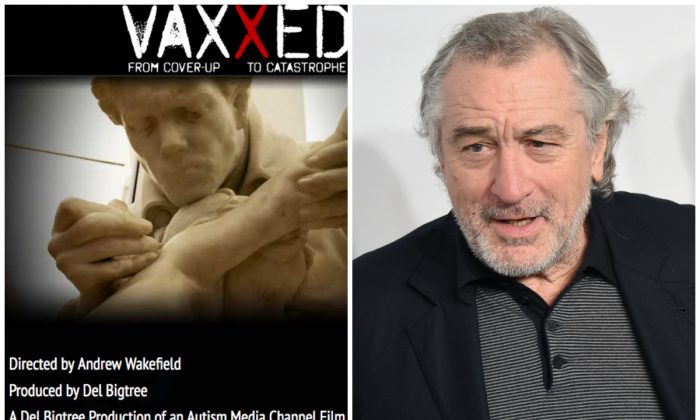 A wave of backlash is building after Robert de Niro pulled the anti-vaccination film,”Vaxxed: From Cover-Up to Catastrophe,” from the line-up at next month’s Tribeca Film Festival.

De Niro, co-founder of the festival, released a statement on Friday, March 25, supporting the inclusion of the film.

“Grace and I have a child with autism and we believe it is critical that all of the issues surrounding the causes of autism be openly discussed and examined,” de Niro said in a Facebook statement. “I am not personally endorsing the film, nor am I anti-vaccination; I am only providing the opportunity for a conversation around the issue.”

UPDATE: 3/26/2016 Statement from Robert De Niro, co-founder of the Tribeca Film Festival, regarding VAXXED at the…

However, on Saturday, De Niro retracted his support and pulled the film.

“But after reviewing it over the past few days with the Tribeca Film Festival team and others from the scientific community, we do not believe it contributes to or furthers the discussion I had hoped for.”

The Facebook entry with De Niro’s statements has sparked a vigorous debate, including 2,644 comments and around 6,000 shares.

We have just witnessed yet another example of the power of corporate interests censoring free speech, art, and truth.
— Andrew Wakefield, film's director

Andrew Wakefield, the film’s director, and Del Bigtree, the producer, posted a statement in response on the “Vaxxed” website, Saturday.

“It is our understanding that persons from an organization affiliated with the festival have made unspecified allegations against the film—claims that we were given no opportunity to challenge or redress. We were denied due process,” the statement reads.

“We have just witnessed yet another example of the power of corporate interests censoring free speech, art, and truth.”

Wakefield and Bigtree said they are undeterred and will be sharing their plans for the movie in the near future.

A Change.org petition was set up on Saturday evening and garnered more than 12,400 supporters in less than 24 hours. The petition is calling for “Vaxxed” to be reinstated at the Tribeca Film Festival.

Several supporters of the petition are from people who say their children were harmed by vaccines. “My son was injured by vaccines and the truth must be revealed,” writes shavon falcon from Marietta, Ga.

“My daughter’s voice deserves to be heard,” says Kim Homan from Camanche, Iowa.

A brief synopsis of the film is included on its website:

“In 2013, biologist Dr. Brian Hooker received a call from a Senior Scientist at the U.S. Centers for Disease Control and Prevention (CDC) who led the agency’s 2004 study on the Measles-Mumps-Rubella (MMR) vaccine and its link to autism. The scientist, Dr. William Thompson, confessed that the CDC had omitted crucial data in their final report that revealed a causal relationship between the MMR vaccine and autism.”

See the trailer for “Vaxxed: From Cover-Up to Catastrophe” below: