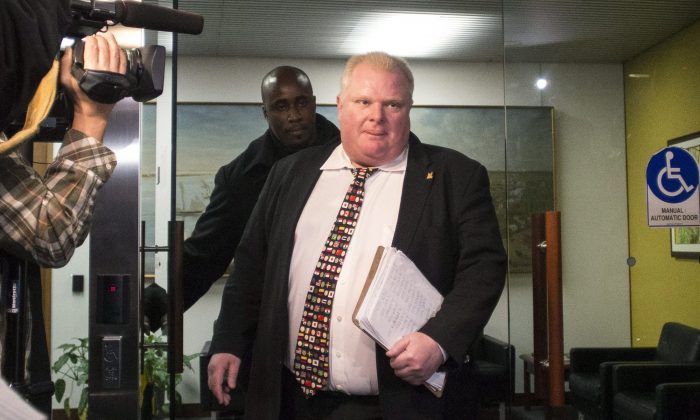 Rob Ford May Have Done Heroin, or ‘Hezza,’ and ‘Dugga’: Reports

Rob Ford, the embattled Toronto mayor, may have tried heroin, or “hezza,” and “dugga,” and he was blackmailed, reports said on Wednesday.

The Toronto Life publication reported that police documents that were released on Wednesday show that Ford may have been photographed doing heroin.

Wiretaps also allege that there were “so much pictures of Rob Ford doing the hezza” and “smoking on the dugga,” it was reported. “Hezza” is a slang term for heroin but it is unclear what “dugga” is. The person who was recorded was Abdullahi Harun, 21, who according to the National Post, is said to be a cocaine and gun trafficking gang member.

The police documents also said that gang members from the Dixon Road area in Toronto may have tried blackmailing Ford with the video that shows him allegedly smoking crack cocaine from a glass pipe.

Toronto Life notes that Ford’s name was recorded, but his voice was never captured on the wiretaps.

The publication said, however, that Ford may have done “heavy drugs” just hours before a community cleanup event in Toronto at one point.

They also may have had photos of him doing heroin and other drugs.

In another call, a voice is heard saying Ford was at a house “smoking his rocks today.” Rocks is slang term for crack cocaine.

The wiretap also got an exchange between Siyadin Abdi and Harun in which one of the men says he needs to do a deal “because Rob Ford wants some drugs.”

Court documents suggest that Ford may have also allegedly tried to purchase the infamous crack video for $5,000 and a car, the National Post said.

The paper reported that Ford may have been set up to do the drugs and was later recorded as a blackmail attempt.

Ford has publicly admitted to smoking crack cocaine while he was in a “drunken stupor.”