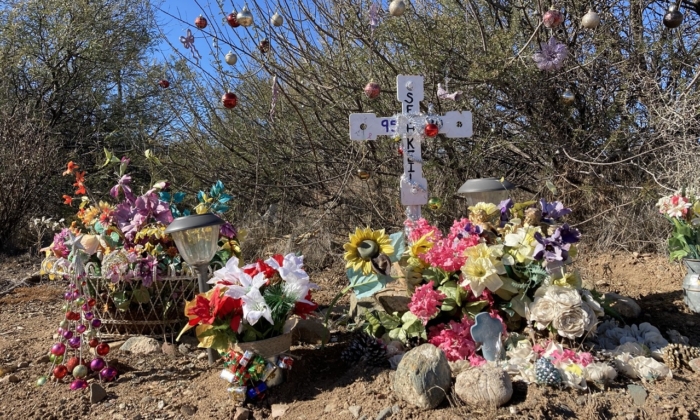 An elaborate display featuring a cross and bouquets of flowers was set up on US Route 17 heading southbound. The name of the crash victim is covered on on Dec. 13, 2021. (Allan Stein/The Epoch Times)
US Features

The last five words Traci Haupert of Peru, Indiana would ever say to her daughter Taylour Sparks were, “Be safe. I love you.”

On that clear spring morning of May 5, 2018, Sparks, who was just 25 years old, was a passenger on her boyfriend’s motorcycle as the two went rolling along on US Route 24, bound for a fundraiser in northern Indiana.

Haupert said they would have completed the 200-mile journey had it not been for the motorcycle’s bald rear tire that blew out at 9:30 a.m. The accident sent Taylour careening onto the cold pavement of the four-lane highway to her death.

Her boyfriend survived the crash.

“Shoulda, coulda, woulda” is a common self-reproach when you lose a child in a traffic accident, Haupert says.

The pain and confusion are unbearable. The regret over what might have been, or done differently, is never-ending, she added.

“She didn’t even make it 10 miles from her house,” Haupert said while struggling back tears on the telephone. “I didn’t realize how many friends my kid had until the day of her funeral. She never knew a stranger.”

As a surviving parent, Haupert said the worst part was having to drive past the spot where her daughter died–over and over again.

She wanted to do something positive to remember Taylour. So the grieving mother built a wooden cross. Inscribed on it were Taylour’s full name, date of birth, and death. Haupert then got to work setting up the cross in a nearby clearing on Route 24 where everyone could see it.

Perhaps it was fate that made Haupert get on her computer one day recently and Google her daughter’s name.

Haupert discovered that someone had already taken a photo of the roadside cross and posted it on the site, along with a short biography of Taylour. She then reached out to Jim Hill, who founded the site in 2014 as a virtual space and registry where people can memorialize their loved ones who died in traffic accidents.

“I’ve taken pictures of so many (roadside) tributes. I’d say probably a third of the tributes aren’t even up anymore,” Hill, a retired engineer at the Ford Motor Co. in Dearborn, Mich., told The Epoch Times.

He now resides in Indiana and works in information technology, although he’s still passionate about improving motor vehicle safety.

Why do people put up roadside memorials?

“Why do people put up headstones?” Hill said. “Really, it’s the same thing. It’s just a way of grieving. It’s just to give them something tangible to remember the person that died.”

“I’ve seen a few people building sites. It feels kind of like breaking into a funeral with uninvited guests.”

The one thing Hill said he noticed in his travels was the faded condition many of the roadside memorials were in. Many had been set up in dangerous locations, making it difficult to access them.

He found a safe solution with his website, which enables grieving people the opportunity to create a lasting virtual memorial to a loved one. His goal is to increase registration from the current 675 listings to 100,000 or more virtual tributes.

The purpose isn’t for ads or financial gain, he said.

“I want people to drive more safely. I can’t stand to see these accidents. I wouldn’t be surprised if there are a million of these (roadside memorials) around,” he told The Epoch Times.

All across the United States communities are filled with roadside memorials to motor vehicle fatalities.

U.S. Route 17 in Arizona is ranked as the fourth most deadly highway in America. More than a dozen memorials can be seen set back from the shoulders of the north and southbound lanes between Flagstaff and Phoenix.

Chiseled into a stone monument at the base of a large homemade cross, flanked with baskets of faded carnations, one roadside tribute reads, “Adam My Forever Love Till We Meet Again.”

The roadside tribute was built near the Campe Verde line. The accident happened on Feb. 25, 2010.

Officials say most states will allow roadside memorials to stand temporarily or for long periods of time provided they are safe, environmentally friendly, regularly maintained, and, in many cases, state-approved. There are currently state-sponsored roadside memorial tribute programs in 23 states.

California is the only state where tributes are prohibited.

“Unless they pose an immediate safety hazard, they are marked with a notice that they need to be removed within 60 days. If ADOT staff need to remove a memorial, it will be stored at an ADOT facility and attempts will be made to contact the family so they can get the items,” Nick told The Epoch Times.

He said the agency “can’t speculate on whether these memorials have a salutary effect on family members or influence driver behavior.”

“I think it does allow the family some closure and a place where they feel they can go to pay their respects to lost loved ones. By erecting a shrine they ensure the person’s memory is not forgotten,” Musselman told The Epoch Times.

In West Virginia, which has a roadside memorial program, approximately 400 people die annually as a result of crashes on state highways.

To help memorialize loved ones killed in crashes, the West Virginia Division of Highways (WVDOH) has created guidelines to erect and maintain roadside memorial signs.

“The Roadside Memorial Sign is an official sign that is provided and placed by the Division of Highways, and is installed as close as possible to the site where a fatal motor vehicle crash occurred. The memorial consists of white lettering on a blue background, and contains 1 of 3 messages chosen by the applicant followed by the name of the deceased,” according to the WVDOH on its website.

Haupert said she got permission from the Indiana Department of Transportation to erect her daughter’s memorial cross.

“I like to be able to take care of it,” she said, although she has to take a deep breath every time she sees it driving by.

“When you see a cross just say a prayer, not for the one who died, but for the ones who survive,” Haupert said.