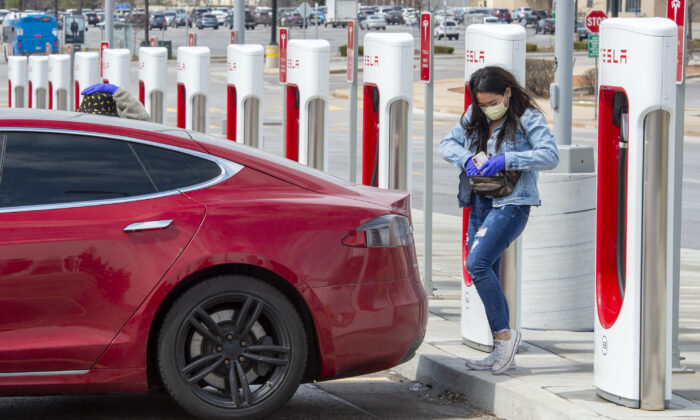 A woman prepares to plug in her electric vehicle in Markham, Ont., in a file photo. (The Canadian Press/Frank Gunn)
Viewpoints

Road to Electric Vehicles: Carrot for the Wealthy, Stick for the Rest

Despite years of coercive effort on the part of the government and billions spent trying to get Canadians to buy electric vehicles, only a mere 5 percent of drivers have chosen to go electric. Research conducted by the Department of Natural Resources concluded that most Canadians simply found electric vehicles to be too expensive to purchase.

So how has the government responded to this information?

They are expanding the range of their subsidy program to cover vehicles worth as much as $70,000 in some cases. It used to cap out at $55,000. If people couldn’t afford to get into an electric vehicle worth $55,000 with a $5,000 price break, why would the government think they would buy into a $70,000 one? We are witnessing government logic at its best here.

Electric vehicles cost between $12,500 to $25,000 more than their gas-powered counterparts. Even with the federal rebate of $5,000, most consumers aren’t willing or able to take on such an added expense for vehicles that remain impractical for most people in our climate.

Electric vehicles are a luxury item. They are typically purchased by high-income urban dwellers with short commutes who rarely range outside the city. In other words, the people who are least in need of subsidies for a vehicle purchase are the ones who are qualifying for it.

Unsurprisingly, in a poll conducted for the Privy Council in 2021, support for electric vehicle rebates is highest among Canadians with post-secondary education and a household income of over $100,000. Of course it is! They are the only people who can afford these vehicles in the first place.

While the subsidy carrot is being offered to high-income Canadians in hopes of coaxing them into electric vehicles, the taxation stick is being offered to people who drive pickup trucks. The government already punitively taxes SUVs and vans by as much as $1,000 to $4,000 depending on the fuel economy of the vehicle. In the latest government emissions plan, it is recommended that this tax be applied to pickup trucks that used to be exempt.

Most of the people who drive SUVs and vans are people with large families or tradespeople. They don’t have the option to simply buy or use a compact car, or the income to buy an expensive electric vehicle. If the tax is expanded to pickup trucks, workers from landscapers to plumbers will be punished for driving the only vehicles they can to ply their trades.

Lower- and middle-income people will be forced to pay that extra tax on their vehicles because it still is far less expensive than getting an electric equivalent.

The current government scheme of taxation under the guise of environmentalism is hiking taxes on middle- to lower-income citizens and transferring those dollars into the pockets of high-income ones. For a government that likes to claim it stands up for the little guy and wants to address income disparity, they sure are going about it in a terrible way.

Maybe one day, electric vehicles will indeed manage to replace all combustion engines. We are still a long way from there though. Electric vehicles are terribly expensive, have limited ranges, and can be time-consuming to charge. Not every home is well-equipped to charge electric vehicles either. Electric home upgrades for car charging can range into the thousands. If you live in an apartment building, you may be totally out of luck.

For now, electric vehicles are a novelty for well-heeled city dwellers. They provide a way for high-income people to virtue signal about their green living practices but remain well out of reach for the common Canadian. The rebates offered for these luxury vehicle owners are bad enough already. It is a slap in the face to the people who are forced to pay extra taxes due to not being able to afford to get into the electric vehicle market.