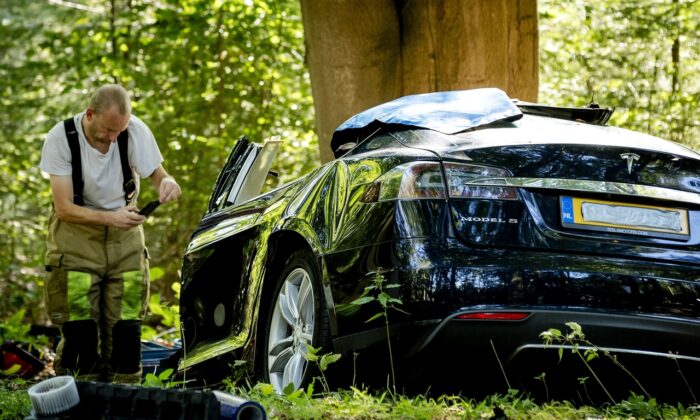 A rescue worker takes a picture after a fatal crash where a Tesla Model S struck a tree in Baarn, the Netherlands on Sept. 7, 2016. (Robin Van Lonkhuijsen/AFP via Getty Images)
US News

The National Highway Traffic Safety Authority (NHTSA) stated Friday that it is examining allegations that Tesla Inc. electric cars may accelerate without warning. The road safety body says that, in all, some 500,000 Teslas may be affected and that the models listed in the petition include the Tesla Model S, Model 3, and Model X. Tesla has not yet responded to the reports.

In support of his request, the petitioner cited 127 consumer complaints to NHTSA involving 123 unique vehicles. The reports include 110 crashes and 52 injuries.” The number of fatalities listed in the ODI résumé that are alleged to have resulted from unintended acceleration, however, is zero.

In another case of alleged unintended acceleration, a Tesla owner in San Clemente, Calif. informed the NHTSA that in Nov. 2018, their Model X accelerated to full power while executing a turn. However, the driver claimed to have had their foot on the brake. The SUV is alleged to have hit a parked vehicle, and the driver subsequently insisted that the Tesla vehicle’s software or electronics “triggered the sudden spontaneously full acceleration, resulting in this collision.”

The NHTSA is currently investigating three crashes involving Tesla electric vehicles from Dec. 2019. A crash occurred in Gardena, California, on Dec. 29, when a Tesla Model S left a freeway at speed, ran through a red light and crashed into a Honda Civic. Two occupants of the Honda died.

A second incident occurred on the same day near Terra Haute, Indiana, when a Tesla Model 3 struck a fire truck parked on Interstate 70, killing the driver’s wife. The NHTSA dispatched crash investigation teams to both accident sites. The third crash in Connecticut is also under investigation, according to the agency. It is unclear what caused the three accidents.

The NHTSA is also investigating several Tesla crashes where it is alleged that the cars were operating on Tesla’s Autopilot system. The system is intended as a driver assistance function that keeps the vehicle in its lane, maintains an appropriate distance to the vehicle in front, and can even change lanes automatically.

Tesla insists that its Autopilot system is not a self-driving function and that drivers must remain alert and ready to intervene, which includes keeping their hands on the wheel at all times. “Autopilot advanced safety and convenience features are designed to assist you with the most burdensome parts of driving,” according to the company. “Autopilot introduces new features and improves existing functionality to make your Tesla safer and more capable over time. Autopilot enables your car to steer, accelerate, and brake automatically within its lane. Current Autopilot features require active driver supervision and do not make the vehicle autonomous.”

The company maintains that Tesla vehicles operating its Autopilot assistance system are safer than vehicles without, but that no system can prevent every crash from occurring. According to the NHTSA, the agency has investigated 23 crashes where the use of driver assistance systems is suspected of having been involved, with 14 involving Teslas.

Tesla responds to battery fire angst with “an abundance of caution”

In October, the NHTSA announced it was investigating whether Tesla was correct in issuing a software update (rather than announcing a recall) for 2,000 of its Model S and Model X cars to solve non-crash-related battery charging issues that could have resulted in battery fires. Tesla issued an upgrade to its battery management software to resolve the issue.

The October petition was filed by the Californian law firm of Edward C. Chen as one of two class-action lawsuits the firm is currently pursuing against Tesla. Chen alleges on behalf of his client(s) that Tesla tried to work around the potential battery fire issue “by using software updates to limit the ability to fully charge the batteries. What happened after, of course, is that owners like … my client saw an immediate range drop of approximately 30 miles or so after updating his car with Tesla’s updates.” This petition is still under investigation.

In May 2019, a statement from Tesla announced the update to its charging software: “As we continue our investigation of the root cause, out of an abundance of caution, we are revising charge and thermal management settings on Model S and Model X vehicles via an over-the-air software update that will begin rolling out today, to help further protect the battery and improve battery longevity.”