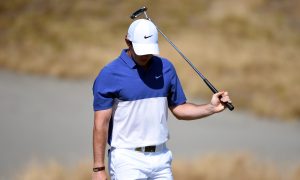 ST. ANDREWS, Scotland—If one were designing a golf hole today that featured a tee shot over a portion of property tied to an adjoining hotel, a menacing deep greenside bunker that swallows golf balls faster than “Jaws” inhaled swimmers, and an actual road and stone wall that awaits the wayward play, you would say such a concept was beyond daft. It would be totally out-of-bounds—no pun intended.

With the return of The Open Championship for the 29th time to the famed Old Course at St. Andrews, the spotlight returns to arguably the most fascinating hole in all of golf. Known to all as “The Road Hole,” the penultimate hole will once again play a critical role in determining what player leaves the grounds as the Champion Golfer of the Year.

The Road Hole played as a par-5 for much of its history. The distance was roughly 465 yards, and for many players the option to go for the green in two shots was fraught with the keen awareness that the Road bunker was only one part of the equation to be solved. The other was the real possibility that an approach from great distance could easily bounce beyond the putting surface and end up on the road—or worse yet, leaning against the stone wall that runs perpendicular to the playing line.

The green is also quite challenging, hugging the frontal bunker like a 4-year-old not wanting to let go of Mother’s arm on the first day of school. The landing surface is also narrow. Any long distance approach must be ever careful in landing softly enough to avoid going long and encountering the road and stone wall that awaits the “too bold play.”

In 1984, Tom Watson was looking to three-peat and win his first Open on The Old Course. Battling with Spain’s Seve Ballesteros for the lead, Watson opted to play an aggressive shot with a two-iron approach. The shot was hit too hard and carried beyond the green and eventually settled near the stone wall. End result? Watson bogeyed the 17th and Seve ended his round in grand fashion with a closing birdie and several fist pumps. John Daly, the ’95 winner, almost botched his effort when hitting the bunker on his approach in the final round. Fortunately for him he was able to win in a playoff against Constantine Rocca.

The legendary Jack Nicklaus always believed the best way to play the hole is via a conservative game plan. The Golden Bear favors getting the approach to finish either just short or on the front portion of the green, thereby taking the frontal bunker and rear road and wall out of play. The strategy is a sound one, but far too many players have played way too aggressively and paid a large price for such hubris.

In the ’10 Open, the hole was lengthened considerably, going to 490 but listed on the scorecard at 495 yards. The tee was actually moved from the existing property to a new tee position on the adjacent driving range area.

How the hole is set up by the R&A in terms of grass cuts that delineate fairway and rough is also crucial. At the ’10 event, the fairway cut was pushed farther to the left and actually took away the possible option in hitting an attacking drive down the more demanding right side. This time around, the right side of the fairway will be cut wider to encourage the bold play on that side. The risk for the players is quite straightforward—play away from the right side and you then encounter a very demanding angle to the green with the Road bunker serving as an effective block. If you play the more demanding tee shot, the reward can be a much easier angle into the green but the slightest push to the right could result in going out-of-bounds or being caught by the rough on that side.