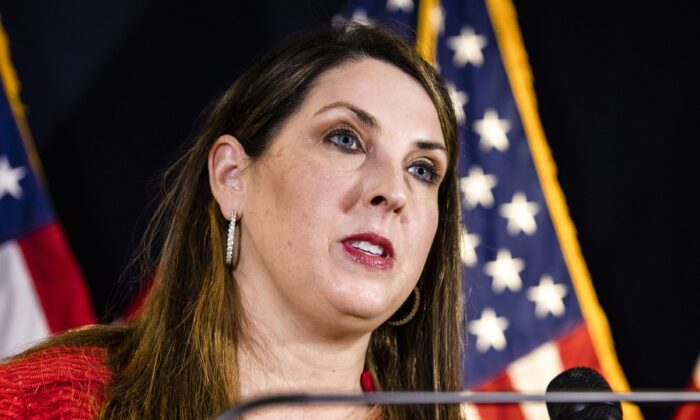 RNC Tells Trump It ‘Has Every Right’ to Use His Name, Image in Fundraising Appeals

The Republican National Committee (RNC) is insisting it has the right to use former President Donald Trump’s name and likeness in fundraising appeals, after Trump sent cease-and-desist letters to the committee.

In a March 8 letter obtained by The Epoch Times, the RNC’s chief counsel Justin Riemer told Trump’s Save America political action committee that the RNC “has every right to refer to public figures as it engages in core, First Amendment-protected political speech, and it will continue to do so in pursuit of these common goals.”

Riemer also said that Trump and RNC Chairwoman Ronna McDaniel enjoy a close relationship, alleging the former president over the weekend reaffirmed to her that he approves of the RNC’s current use of his name in fundraising and other materials, including for an upcoming donor retreat event in Palm Beach in which Trump is slated to participate.

“The RNC has not sent any fundraising requests in President Trump’s name or used his image since before he left office, nor would it do so without his prior approval,” the lawyer wrote.

The Save America committee didn’t respond to a request for comment.

The pressure on the groups is part of an intra-party struggle over who heads the GOP. A growing number of Republicans have publicly opposed the former president, including 17 who sided with Democrats in the latest impeachment saga.

Trump plans on supporting primary opponents to some sitting lawmakers, including Sen. Lisa Murkowski (R-Alaska), one of seven senators who voted to convict him on a charge of incitement of insurrection.

Trump was ultimately acquitted because 43 senators voted against the charge.

Trump urged supporters on Monday to stop giving money to so-called RINOs, or Republicans in Name Only.

“They do nothing but hurt the Republican Party and our great voting base—they will never lead us to Greatness. Send your donation to Save America PAC at DonaldJTrump.com. We will bring it all back stronger than ever before!” he said.

Trump told a crowd at the recent Conservative Political Action Conference that he opposes House Conference Chair Liz Cheney (R-Wyo.) staying in office, before telling supporters to “get rid of” all the members of Congress who voted against him in the latest impeachment saga.

“I will be actively working to elect strong, tough, and smart Republican leaders,” Trump declared. “RINOs will destroy the Republican Party … and the American workers.”