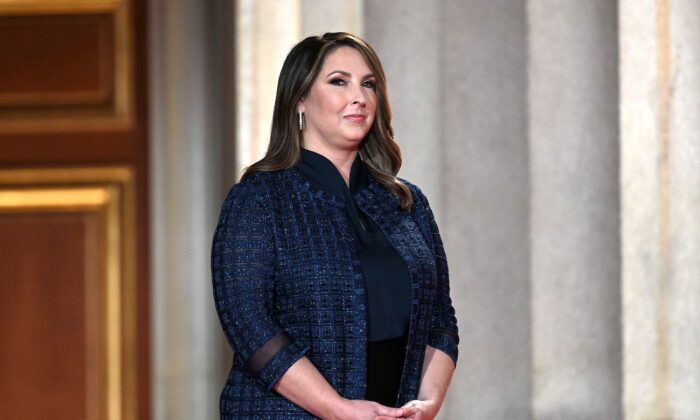 The Republican National Committee (RNC) and the Georgia Republican Party filed a lawsuit in Georgia demanding that Republican poll watchers be granted lawful access in the upcoming Georgia Senate runoff election on Jan. 5, 2021.

“Laws need to be followed so voters can have confidence in the results,” RNC Chairwoman Ronna McDaniel said in a statement. “I am pleased to announce the RNC & [Georgia Republicans] have filed suit demanding Georgia election officials follow the laws on their books as they pertain to poll watchers & drop boxes.”

The suit is seeking enforcement of “two vital facets of the Georgia Election Code governing (1) the rights of duly appointed poll watchers and (2) statutory safeguards attending the use of ballot ‘drop boxes’ as a method of absentee voting.”

The suit is filed in the Superior Court of Fulton County against the State Election Board and other board officials, including Brad Raffensperger, the secretary of state of Georgia and the chairman of the board.

The RNC and the Georgia Republican Party alleged that the rights of poll watchers were stunted in many polling and tabulation locations throughout the state during the Nov. 3 election as well as during a subsequent recount.

“Upon information and belief, the same or substantially similar unlawful practices will resume in connection with the imminent January 5, 2021 runoff election,” the filing reads. “As the primary and superordinate regulatory officials charged with the oversight of elections, the Defendants are statutorily required to ensure that county and municipal superintendents and registrars are properly and lawfully instructed on the rights of poll watchers and do not implement policies or procedures that impair their ability to fully and meaningfully observe the election process.”

The suit said that poll watchers designated by the Georgia Republican Party in connection with the Nov. 3 election were “denied a meaningful opportunity to observe” any ballot processing or tabulation activities. The filing cited 14 separate affidavits filed by poll watchers that allege county personnel moved them large distances away, or placed them in a different room, from the employees conducting ballot counting or tabulation, such that it prevented them from meaningfully observing the action.

Plaintiffs are seeking a declaration, among other points, that each poll watcher is allowed to move between observation stations and allowed to be in places that lets them verify that “all aspects of all voting and tabulation process (including, but not limited to, the issuance, submission, verification, curing, duplication, tabulation, and recount of ballots) are carried out in a correct, accurate and lawful manner.”

The suit is also seeking an injunction or writ of mandamus that orders Raffensberger to “promptly, but no later” than Jan. 5, 2021, “prepare and disseminate to county registrars and superintendents training materials … concerning the statutory rights of poll watchers as soon as practical to ensure compliance during the runoff election process.”

Ballot drop boxes had never been used in any Georgia election prior to 2020 and that “no provisions” of the Georgia law that governs absentee voting in the state “references or contemplates the concept of ‘drop boxes’ as a method of returning absentee ballots,” the RNC and the Georgia Republican Party noted in their complaint.

Plaintiffs said that the State Election Board had around April 2020 “promulgated” what is being referred to as the “Drop Box Rule,” which authorizes county registrars “to establish one or more drop box locations” as a way for voters to mail their ballots to the county registrars. The Drop Box Rule also mandates continuous video recording surveillance of every drop box location, the plaintiffs noted.

Plaintiffs allege that the defendants appear to permit absentee ballots to be deposited into drop boxes throughout all hours of the day, every day, including times outside regular business hours of the county elections office. They also allege that the State Election Board and its officials “does not take the position that the Plaintiffs are entitled to access or view video surveillance of drop box locations in real time, or as near real time as practicable.”

The RNC and the Georgia Republican Party are seeking a declaration that the Drop Box Rule is only valid if it permits the dropping off of absentee ballots “only during regular business hours” and “require that continuous video surveillance footage of all drop box locations in the state must be made available in real time or near-real time streaming,” or be quickly made available upon request at no or little cost to the requestor.

Georgia Sens. Kelly Loeffler (R-Ga.) and David Perdue (R-Ga.), who are facing separate runoff races on Jan. 5, 2021, called on Raffensperger last month to resign over “mismanagement and lack of transparency” in the counting process.” Raffensperger responded, “That is not going to happen. The voters of Georgia hired me, and the voters will be the one to fire me.”