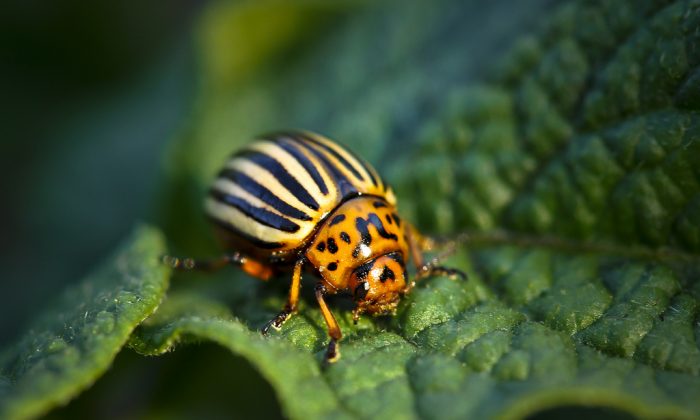 "This is an insecticide that is based on a specific gene," says Jeff Scott. "Thus, you might be able to kill only that specific insect, and that would be a phenomenal breakthrough in pest control." (andriuXphoto/CC BY-SA 2.0)
Environment

An insecticide currently in development targets a specific gene so it kills only those bugs that threaten crops and avoids collateral damage to beneficial insects.

Though the technology is still in its infancy, the RNA-based insecticide can be effective for at least 28 days when sprayed on a leaf. That finding dispels concerns that the genetic material will quickly degrade in rain and sunlight.

In the proof-of-principle study researchers wanted to answer whether an RNA-insecticide spray would be stable enough to use in agriculture.

They matched double-stranded (ds) RNA to an actin gene in the Colorado potato beetle, a leading potato pest that costs North American farmers $100 million per year and also damages tomato and other plants.

Actin genes produce actin proteins that are essential for many cellular functions and prevalent in eukaryotic cells, and were used in this study to test how stable the ds RNA would be in the field.

Once applied on leaves, the ds actin-RNA insecticide was highly effective on potato beetles that ate the leaves.

“The major problem with conventional insecticides is they affect non-target organisms,” says Jeff Scott, a professor of Cornell entomology and a coauthor of the study in Pest Management Science.

“This is an insecticide that is based on a specific gene. Thus, you might be able to kill only that specific insect, and that would be a phenomenal breakthrough in pest control.”

RNA, ribonucleic acid, is present in all living cells. Mainly, it acts as a messenger carrying instructions from DNA for controlling the synthesis of proteins. For the last two decades researchers have employed a process called RNA interference, where double-stranded RNA is tailored to match a gene’s sequence, such that once injected into a cell it hunts out and destroys the transcripts of a specific gene.

Geneticists have used the technique to silence specific genes, examine what functions are lost and hence learn that gene’s purpose. The idea for crop protection was born out of this technology.

As part of the study, Scott and Keri San Miguel put a film of ds RNA on plate glass and exposed it to ultraviolet light, which is found in the sun’s rays and breaks down many materials. They discovered that under such direct exposure, half the RNA degraded within an hour.

More study is needed to understand why, once sprayed and dried on a potato leaf, the ds RNA lasts 28 days or longer, but Scott speculates the spray may be protected by shade from tiny hairs on the leaf, or perhaps it soaks into the leaf.

The researchers also experimented on whether the ds RNA moved around the plant. They found that when a leaf is cut and the stalk is placed in solution with RNA insecticide, and potato beetles ate that leaf, mortality occurred but it wasn’t as high. They also found that when one leaf was treated with spray, the RNA did not transfer internally to other leaves.

The insecticide needs more work before it is ready to market, Scott says. For example, the cost of making RNA insecticide is currently much higher than conventional insecticides.

Also, for insects need to eat sprayed leaves for it to work so insects that don’t eat leaves, such as houseflies, or those that suck sap, such as aphids, won’t be harmed. Also, some insects are simply unaffected, perhaps due to gut enzymes that break down the ds RNA.

“The technology is really at its infancy,” Scott says. “It may take some tweaking but its potential to be specific is going to be hard to beat.”

The Atkinson Center for a Sustainable Future and Hatch funds supported the work.