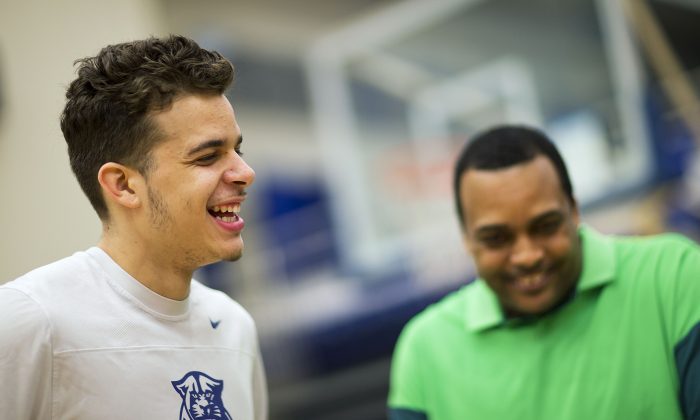 RJ Hunter, a junior at Georgia State, hit a three-pointer with just seconds left in the second round of the NCAA tournament to propel his team past Baylor.

Georgia State was seeded No. 14 while Baylor was No. 3.

The surprising shot actually knocked Hunter’s father Ron Hunter off of his chair.

Ron Hunter recently had surger on his Achilles tendon after tearing it, thus sitting on a chair on the sideline instead of standing.

When RJ knocked down the three-pointer, Ron fell off of his chair.

He was unhurt, though, and grinning.

RJ is an NBA prospect, and is considering entering the draft after this season. But his father recently told USA Today that he’s doing all he can to make RJ stay in school.

“I’m going to buy him a car and give him a lot of money and new clothes when we’re done with this. I can illegally recruit him and get away with it,” Hunter joked. “His mom is going to get something really special too so she can be on my side and we can kind of sweet talk him into coming back.”

Why Wisconsin Has the Best Shot to Beat Kentucky