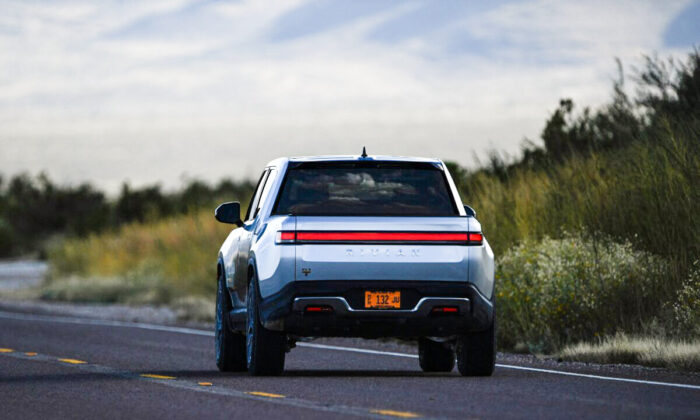 A Rivian R1T electric truck drives down a highway near the entrance to Blue Origin's Launch Site One outside of Van Horn, Texas, on Oct. 12, 2021. (Patrick T. Fallon/AFP via Getty Images)
Companies

Electric transport startup Rivian will be setting up a second factory in Georgia, according to a company announcement on Thursday, indicating a positive outlook despite posting losses for the recent quarter after a disappointing Wall Street performance.

From the proceeds of its Nov. 10 initial public offering, the Amazon-backed electric vehicle startup will invest $5 billion toward developing a carbon-conscious campus in Morgan and Walton Counties, located east of Atlanta. Following months of speculation, construction is expected to start by summer next year and production is slated for 2024.

“The plant, which will eventually employ more than 7,500 workers, represents a key next step as Rivian scales aggressively toward higher-capacity production for our future generation of products. Once ramped, the Georgia facility will be capable of producing up to 400,000 vehicles per year,” said the company in a statement.

The new factory is expected to enhance the production capability of Rivian. A battery production unit is also planned nearby. Rivian’s existing unit in Normal, Illinois, can make around 150,000 cars on a yearly basis, which it expects to increase to 200,000 by 2023. The company is also hiring 800–1,000 employees in Normal by the second quarter, 2022.

After going public last month, Rivian posted a quarterly loss of about $1.2 billion, while shares fell 9.8 percent following an announcement regarding pre-order numbers and the company’s lower expectation on vehicle production.

Rivian launched its R1T electric pickup in September and the R1S electric SUV is scheduled for next year, after repeated delays. The company has delivered 386 vehicles out of its 652 unit inventory, and has a contract to build 100,000 electric delivery vans for major shareholder Amazon by 2025.

The California-based automaker has a market value of about $93 billion after raising around $14 billion in last month’s IPO. Amazon owns a fifth of the company, and has invested, along with other partners, around $10.5 billion initially. Ford owns approximately 12 percent of Rivian.

The company considered renewable energy production and availability of quality talent among other deliberations on choosing the 2,000-acre site.

“We’re happy to partner with Georgia on our new manufacturing site, which will build our next generation of products that are important for scaling our business … We’re excited for Georgians to bring their creativity and ideas to Rivian. We’re confident that, alongside Illinois, Georgia is the place for Rivian to continue to scale and thrive,” said Rivian Chief People Officer Helen Russell in the press release.