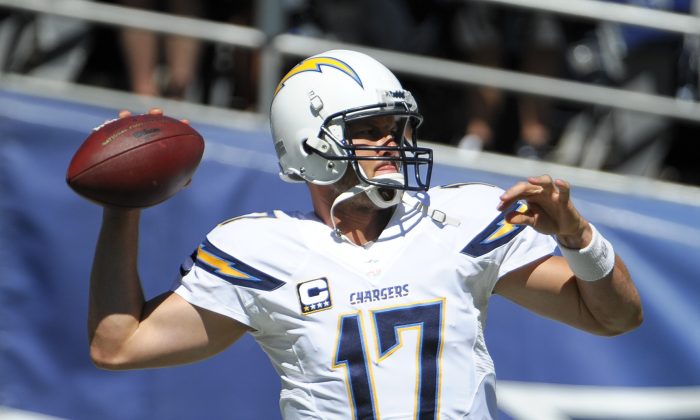 He just needed to be plopped into the no-huddle, no-hurry offense that rookie Chargers coach Mike McCoy and his top assistants drew up.

Rivers has thrown for 400 yards twice in four games after doing it three times in his previous nine seasons combined.

He’s completed 73.9 percent of his passes for 1,119 yards and 11 touchdowns against only two interceptions. His passer rating of 118.8 is more than 23 points higher than his career average of 95.5.

Rivers heard all the talk in the offseason about what McCoy needed to do to “fix” the quarterback, who in the two previous seasons combined had thrown 35 interceptions and been sacked 79 times.

Rivers didn’t think he needed to be fixed, but said playing in the new offense “has been fresh.”

“It’s been new and has kept everybody engaged,” Rivers said. “Rather than having something we’ve known so well, it’s kept us all on our toes because we’re still trying to fine tune it and get there. I like what we’ve done the first four weeks. It’s given us some tempo, helped us sustain some drives. But when the ball’s snapped, you still have to execute a play, whether you’re at the line, whether you huddled or what. We’re not running any magic plays out there.”

The Chargers do still huddle at times. It’s not a fast-break offense, but there’s a definite faster tempo and it gives Rivers more flexibility.

Offensive coordinator Ken Whisenhunt quickly calls in a play — or sometimes two plays at a time. Rivers gets to the line of scrimmage with roughly 20 seconds left on the play clock, enough time to read the defense and either run the play that was called or check into a different play. It’s a luxury he didn’t have in Norv Turner’s offense, unless the Chargers were in a two-minute offense.

“A lot of things what you see on tape from him in the past, you knew that he could do those things,” Whisenhunt said. “It’s nice to see him do that on the field. I’m excited for him because he’s having a lot of fun and he’s playing really good football. … It’s exciting to see him make those plays. He’s a natural for this style of offense as far as the no-huddle just from how he manages things.”

Whisenhunt said the Chargers’ version of the no-huddle has elements from the one he used with the Cardinals, the offense McCoy devised for Peyton Manning last year when he was Denver’s offensive coordinator and even some from the K-Gun that quarterbacks coach Frank Reich learned while backing up Jim Kelly in Buffalo. Reich also worked with Manning as part of Indianapolis’ staff from 2006-2011 and was with Arizona last year.

“We’ve put a lot of work in as a staff in the offseason coming up with this offense,” Whisenhunt said. “But what’s really important is that it’s its own system right now and guys buy in and you have a guy like Philip that’s running it well.”

McCoy said the offense is designed to take advantage of what his players do best and to get mismatches.

“I learned a lot last year from doing more of it,” McCoy said. “You always do it in two-minute situations during games. It something we did every snap last year.”

Rivers found plenty of mismatches in San Diego’s 30-21 comeback victory against Dallas on Sunday. He threw two touchdown passes to Danny Woodhead — the first time the running back had multiple TD catches in a game — and a 56-yard scoring pass to Gates, who got open against linebacker Sean Lee.

Even though the new staff’s way of calling the offense was completely different, Rivers was on it from the start, McCoy said.

“The first couple days we sat down with him, we talked to him about the way we’re going to do things,” McCoy said. “Well, he’d call Frank or text him something, ‘What’s the next thing?’ Or he’d get the install for the OTA’s (organized team activities) and then he’d want the next one. He was always a day or two ahead. And before we left on vacation he had a bunch of notes of certain things he wanted to get to because he had looked into the play book a little deeper than anyone else in what we had gotten to at that point.”

Gates also thinks Rivers’ early success is because he’s not being hit as much as he has been in previous years. Sacked 49 times last year, Rivers has been dropped just six times a quarter of the way into the season.

Rivers has had big seasons before, so he’s trying not to make too much of what he’s done in four games. And he notes that the Chargers, who blew fourth-quarter leads against Houston and Tennessee, are just 2-2.

“I think there have been a lot of positives and advantages to what we’ve done on offense,” he said. “But at the same time it’s a two-fold deal. We’ve got to play well, too. If you have a play called and you throw it over his head, we’re not doing very well.”