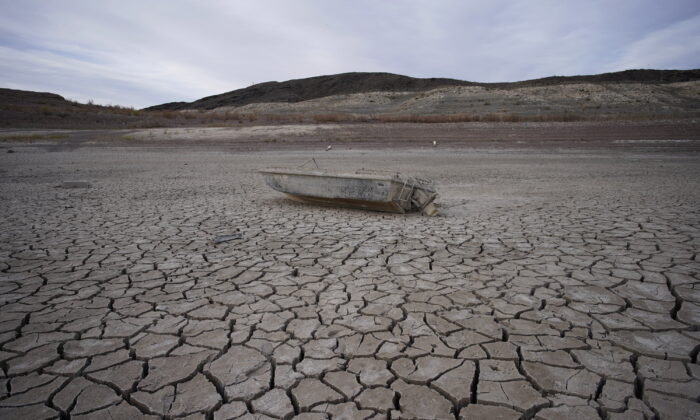 A formerly sunken boat sits on cracked earth hundreds of feet from the shoreline of Lake Mead, at the Lake Mead National Recreation Area, on May 10, 2022, near Boulder City, Nev. (John Locher/AP)
Business Columnists

Drought threatens commerce across the Northern Hemisphere
By J.G. Collins

The River of Doubt, Rio da Duvida, now known as the Roosevelt River, is a tributary of the Aripuanã River, which, in turn, via the Madeira River, flows into the Amazon. It nearly killed Theodore Roosevelt after he was the first white man to explore it following his loss during the 1912 presidential election. It’s a treacherous river, rarely traveled, and unforgiving.

Today, there are several “rivers of doubt,” but in Europe, North America, and Asia, all the doubts are about how drought will affect the advanced industrial economies on those three continents. As we shall see, like the original River of Doubt, drought in these rivers will cause treacherous consequences, are only rarely seen, and the effects are unforgiving.

On the Rhine, the inland waterway that carries goods and commodities among Switzerland, Germany, France, and the Netherlands, water levels are so low that barges are being loaded well under their capacity in order to be able to navigate the river. Shipping companies are asking—and getting—premiums for transporting barges along the river, exacerbating Europe’s inflation, which printed at 8.6 percent in the eurozone in June.

The Danube is similarly low, so much so that some of the countries in the Balkans are dredging it so that barges can pass. Along the Ruhr River Valley, Germany’s industrial heartland, moving the commodities necessary to make steel and fuel coal-fired plants has been hindered by the drought. At this writing, the measuring point at Kaub, west of Frankfurt, and a critical data point because it is a bottleneck for barge traffic, measures about 148 centimeters (cm), roughly 4 feet, 10 inches. It had been as little as 49 cm, or 19 inches, earlier this month. It is anticipated the current respite will dissipate going into the fall and that low depths will return to hinder river navigability.

The Seine River is similarly low, with fish dying and the grapes for French wine at risk of dying on the vine. The Po River, in northern Italy, is in similar peril.

In England, the source of the Thames has virtually dried up. In July, the Thames River basin experienced its driest month in more than 85 years.

Drought conditions across the American Southwest are expected to last until at least November, as illustrated in this map from the National Oceanographic and Atmospheric Administration.

Drought extends to all or parts of the Missouri, Colorado, Platte, and Sacramento rivers, as well as along the Rio Grande. There is also drought in Massachusetts, Connecticut, and other New England states.

Unlike Europe, though, most of America’s inland waterways lay in the Mississippi River basin, and have been mercifully spared from most of the effects of drought and, so, remain still navigable. But there is a movement to divert some of the Mississippi to the Colorado. That proposal is bound to bring about intense political debate.

But rivers like the Colorado, Sacramento, and Missouri are critical for agricultural irrigation, so drought will affect crop production and feed prices. In California, the San Joaquin River Valley, which produces most of California’s produce, near 13  percent of the nation’s total, is deep in the midst of a two-year drought, together with what authorities describe as  “unprecedented low runoff from the Sierra-Cascade snowpack.”

Along the Colorado River, Lake Mead is at about 28 percent of capacity, and Lake Powell is at about a quarter of capacity; these are two of the largest reservoirs in the West. The situation with Lake Mead is illustrated well with this video report from Fox 5 in Las Vegas and from these photos from NASA.

Lake Mead is critical because it helps provide drinking water and hydropower, via the Hoover Dam, for much of the southwest.  The turbines that create the power require a depth of at least 1,000 feet in the Hoover Dam. As of this writing, the water depth is just 1,043 feet.

Recent monsoon rainfalls in the Southwest will provide only a brief respite from drought. That’s because much of the rain will not make it to the water table because the ground is so hard and dry; the rapid, heavy rainfall will simply run off to the ocean. The drought has been so severe that experts say it will take three years of above-average rainfall for the region to truly recover from drought.

In China, temperatures in Sichuan have hit 104⁰F amid the worst drought in more than half a century. According to Bloomberg, daily hydropower, which provides more than 80 percent of the power for the province, has dropped by 51 percent. Factories in the province have been ordered to shut down, which is a key manufacturing center for electric vehicle batteries and solar panels. In the megacity of Chongqing, some shopping malls have been ordered shut until the evening to save on power needed for air conditioning.

The Beijing government is seeding clouds to generate rain, in the hope of protecting crops dependent on the Yangtze River basin. All of this exacerbates China’s already sinking levels of gross domestic product.

Continuing drought could become, and likely is, an existential danger to thousands of companies and industries in the global economy, particularly in regions where hydropower is the primary driver of energy. For many of those companies and industries, energy costs will become  prohibitive and imperil their status as going concerns.

For other producers, the dangers to water-borne shipping on inland waterways will escalate producer prices and, very likely, cut production for lack of supplies. For workers, that would mean layoffs in manufacturing, transport, warehousing, and sales jobs, just as consumer prices will be increasing because of the shocks to agricultural economies brought about by draught.

From a policy perspective, there is little a government can do, other than to ease some of the acute pain of the drought; something that might be called economic palliative care to ease the pain of, but not cure, supply-side inflation. Countries can loosen their restrictions on the use of carbon fuels to ameliorate near crisis-level hydropower shortages so that coal and natural gas can fire electric-generating plants. Tax reductions might alleviate the enormous costs, by increasing disposable incomes, that consumers will incur if the drought continues. It also might help to reverse recent monetary-tightening trends among, for example, the U.S. Federal Reserve, the Bank of England, and the European Central Bank, to enhance liquidity of profit-constrained industrial companies and retailers.

Longer term, developed economies in the Northern Hemisphere can do things that have little additional costs, but which can materially reduce energy and water usage. In cities, for example, this might include using road-paving surfaces with a high albedo rating to reflect, rather than absorb, sunlight to reduce the urban heat island effect (UHIE) and air-conditioning use; wider use of astro-turf on playing fields, and even parks, to preserve water; planting trees along streets and thoroughfares to further reduce the UHIE; tax credits for geothermal and gas-fired heat pumps; and, in particularly dry climates, normalizing a culture of rock garden landscaping, as in Japan, over green lawns, to preserve water.

I will leave to others to dispute or advocate that “climate change” is the cause of these droughts, as that matter is well beyond the scope of this article. My personal view is that localities are better equipped to address UHIE, and electricity and water conservation, than national or regional governments.