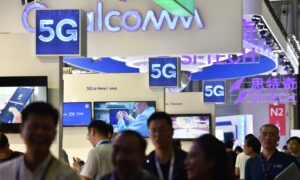 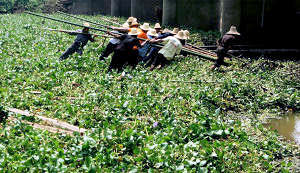 At noon on August 28, 2007, the villagers clean up water hyacinth in the Laodao river under the scorching sun. (Epoch Times Archive)
China

China—Massive growth of water hyacinth is damaging the Laodao River in Changsha City. This is another serious pollution incident following the cyano-bacteria incident in major lakes such as Taihu, Chaohu, and Dianchi.

According to the villagers, over the past several days, water hyacinth has covered areas as wide as 700 meters in the river. People could even walk freely on top of the plants in certain areas because the plants pile up as high as three meters. The odor from the decaying plants permeates the nearby villages and is affecting the locals' quality of life.

Challenges Living Near the River

Mr. Zhou, a resident in a nearby village said, “Water hyacinth grows quickly. There were only some a few days ago. Now, they are in clusters and layers.”

He said, “The increasing industrial pollution in the Laodao River is the cause of the water hyacinth over-growth. Everyone in the village is helping to clean up the plants. However, we fear that won't resolve it. As long as the fundamental issue, the pollution, is not taken care of, water hyacinth will grow again.”

Mr. Zhou provides this background, “The Laodao River is located at the junction of Chunhua Town, Changsha City and Yong'an Town, Liuyang City. There are many manufacturing factories in the surrounding counties and cities. These factories discharged untreated industrial waste water directly into the river. Recently, some pipelines were exposed due to low water periods of the river. The waste water from those pipelines was dark and the odor was unbearable.”

Mr. Fan of Yong'an Town mentions, “Both this year and last year, there were incidences of tons of sulfuric acid discharges from the factory into the river.”

He says, “All kinds of industrial waste are disposed of into the river, including trash, raw materials, liquid and solid waste, and even toxic waste. The villagers no longer consume the river water. They don't even dare to do laundry in the river. Everyone is buying mineral water now.”

Mr. Fan also indicates that environmental protection experts had issued urgent appeals to clean up the Laodao River. Otherwise, it will soon lose its ability to self-clean. Many villagers have also reported the problem to the local officials to no avail.

The Drinking Only Water Source

The Laodao River runs 141 kilometers and covers 23 townships with a population of 86 million. It serves the agricultural irrigation, drinking water and industrial uses of the population. It also serves as the only drinking water source for the surrounding area, the Changsha City economic development area, and seven Biomedical and Research Parks.

Official figures show that all major rivers in Liuyang City, such as Liuyang River, Laodaohe, and Nanchuan River are contaminated. Liuyang City is reported to annually generate at least 12 million tons of rural sewage and more than 10 million tons of industrial waste water. As a result, the quality of drinking water is increasingly deteriorating.

Water hyacinths are free-floating aquatic plants. They propagate quickly and can block the river. Once they decompose, they cause water pollution.