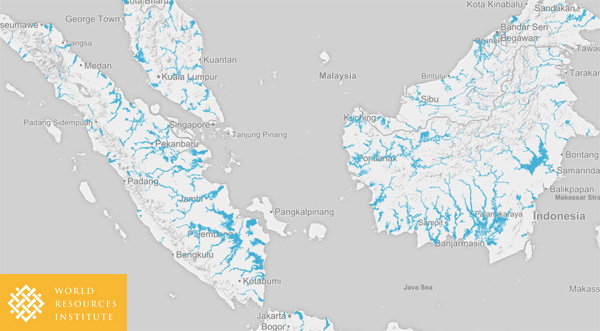 20.7 million people are affected by river flooding each year, and the number is expected to more than double by 2030 as population growth, urban expansion, and climate change will increasingly put people at risk.

This according to the World Resources Institute (WRI), who recently released the Aqueduct Global Flood Analyzer, an online tool to help public, private, and corporate entities understand flooding potential and develop risk reduction and mitigation strategies.

56% of people at risk of being impacted by river flooding live in just three countries: India, Bangladesh, and China. These combined with the next 12 largest impacted populations—in Vietnam, Pakistan, Indonesia, Egypt, Myanmar, Afghanistan, Nigeria, Brazil, Thailand, Democratic Republic of Congo, Iraq, and Cambodia—account for 80% of the people at risk world-wide.

The United States ranks highest among high-income countries: with an estimated 167,000 people impacted by river flooding each year, earning it 18th place among the 160 countries analyzed.

According to WRI, an average of $96 billion in global Gross Domestic Product (GDP) is exposed to river flooding each year. India currently suffers a $14.3 billion average annual impact, with “middle-of-the-road” predictions estimating that amount could increase to $154 billion by 2030 as development places more people and industry in flood-prone areas.

As a percentage of GDP, Bangladesh is most significantly affected, with as much as 4.75% or $5.5 billion exposed to river floods. That number is expected to increase to over $40 billion by 2030.

The Analyzer uses 2010 GDP, population, and land use data for assessing impacts, coupled with hydrological data from 1960 to 1999. Flood inundations are based on severities ranging from 2-year to 1000-year floods (measurements of statistical likelihood of floods of a certain size occurring, not the predicted interval). The economic and human impacts are then adjusted based on each country’s income level—a proxy estimate for the extent of flood protection including levees, dams and other infrastructure.

For future predictions, the authors use data from the Intergovernmental Panel on Climate Change Assessment Report 5, combined with a series of Global Climate Models with bias correction provided through the Potsdam Institute for Climate Impact Research ISI-MIP analysis.

Although an analysis of this scale is important for understanding global trends, it can only make predictions based on broad strokes and general estimates.

In addition, the Aqueduct Global Flood Analyzer only accounts for river flooding, and does not factor in flooding due to sea-level rise which will impact an estimated additional 129 to 216 million people over the next century.