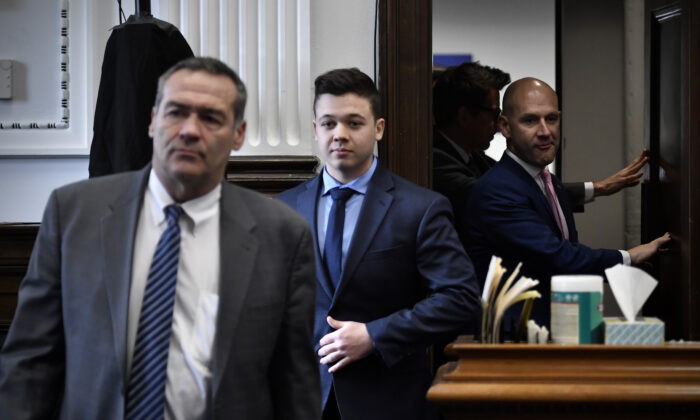 Kyle Rittenhouse, center, enters the courtroom with his attorneys Mark Richards, left, and Corey Chirafisi for a meeting called by Judge Bruce Schroeder at the Kenosha County Courthouse in Kenosha, Wis., on Nov. 18, 2021. (Sean Krajacic/The Kenosha News via AP/pool)
US News

The jurors in the trial of Kyle Rittenhouse resumed their deliberations for a fourth day on Friday, according to court pool reporters.

Over the past three days, the jury panel has deliberated for about 23 hours at the Kenosha County Courthouse in Wisconsin. It’s not clear when they’ll render a verdict in the trial.

Rittenhouse, who is accused of killing two people and shooting another during riots and protests in Kenosha last year, is charged with five felonies. The most serious charge against him could land him life in prison.

As the third day of deliberations ended Thursday, a juror asked Circuit Judge Bruce Schroeder if she could take the jury instructions home, and he said yes. Before deliberations, Schroeder read the jury some 36 pages of explanation of the charges and the laws of self-defense.

Rittenhouse attorney Mark Richards told the judge he feared that letting members take home instructions would lead to jurors looking things up in the dictionary or doing their own research.

Earlier Thursday, Schroeder barred MSNBC from entering the courtroom after a freelance journalist was stopped by the Kenosha Police Department for running a red light while allegedly following the jury bus. Police said they believed the individual was attempting to take photographs of the jurors.

“I’ve instructed that no one from MSNBC News will be permitted in this building for the duration of this trial,” Schroeder said Thursday. “This is a very serious matter and I don’t know what the ultimate truth of it is, but absolutely it would go without much thinking that someone who is following the jury bus, that’s an extremely serious matter and will be referred to the proper authorities.”

In a statement, NBC confirmed that a freelancer received a traffic citation but denied he was attempting to photograph the jurors.

“While the traffic violation took place near the jury van, the freelancer never contacted or intended to contact the jurors during deliberations, and never photographed or intended to photograph them,” the outlet said in a statement to The Epoch Times. “We regret the incident and will fully cooperate with the authorities on any investigation.”

Earlier, the defense entered a fresh motion for a mistrial, arguing that they received a poor-quality version of a drone video from the FBI that was captured during the night of the shootings. But prosecutor James Kraus said he texted the video to the defense, saying that the video quality was reduced when transferring it from iPhone to Android.

Throughout the week, including Thursday, a number of Black Lives Matter and other left-wing demonstrators chanted slogans in front of the Kenosha courthouse.

“We’ll shut everything down,” one protester shouted. “The justice system, this whole system.”