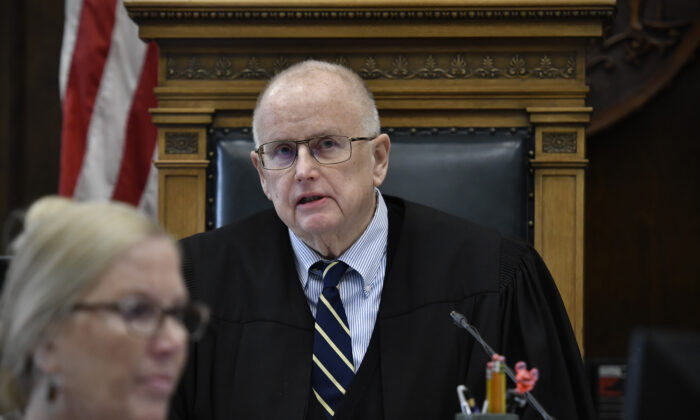 Judge Bruce Schroeder alerts the attorneys that a man claiming to be with a major news network was arrested the previous night during Kyle Rittenhouse's trial at the Kenosha County Courthouse in Kenosha, Wis., on Nov. 18, 2021. (Sean Krajacic/The Kenosha News via AP, Pool)
Judiciary

Jackson Elliott
Reporter
Jackson Elliott reports on small-town America for The Epoch Times. He learned to write and seek truth at Northwestern University. He believes that the most important actions are small and that as Dostoevsky says, everyone is responsible for everyone and for everything. When he isn’t writing, he enjoys running, reading, and spending time with friends. Contact Jackson by emailing jackson.elliott@epochtimes.us
View profile
Follow
, Zachary Stieber

Zachary Stieber
Reporter
Zachary Stieber covers U.S. news and stories relating to the COVID-19 pandemic. He is based in Maryland.
View profile
Follow
and Jack Phillips

KENOSHA, Wisconsin—A bus containing jurors mulling over the fate of Kyle Rittenhouse was followed on the evening of Nov. 17, authorities announced Thursday.

The person who followed the jury bus identified himself as James J. Morrison and claimed he was a producer for NBC and MSNBC, Kenosha County Circuit Judge Bruce Schroeder, who is presiding over the trial, said in the courtroom, reading from a police report.

He was instructed by a superior to follow the bus, said the judge, who added that he’ll decide what to do about the situation soon.

The courtroom was silent except for the hum of the air system while the stunning disclosure was revealed.

The superior was named as Irene Byon, who was said to be based in New York.

Byon is listed on LinkedIn as being an NBC booking producer. Her LinkedIn was deleted on Thursday.

Morrison was pulled over by the police after running a red light, according to the police report.

The person claimed to be affiliated with a national media outlet, according to a brief statement from the Kenosha Police Department, which did not name the outlet. The person was taken into custody and issued several traffic-related citations.

“Police suspect this person was trying to photograph jurors. This incident is being investigated much further,” the department said.

No photographs were obtained of jurors, police said. Jurors are not being sequestered; they have been allowed to leave the court each night and on weekends.

Schroeder said he is banning all MSNBC reporters from the courthouse due to what happened.

“This is an extremely serious matter and will be referred to the proper authorities,” he said.

An NBC spokesperson told The Epoch Times in an email that a freelancer received a traffic citation on Wednesday night.

“While the traffic violation took place near the jury van, the freelancer never contacted or intended to contact the jurors during deliberations, and never photographed or intended to photograph them. We regret the incident and will fully cooperate with the authorities on any investigation,” the spokesperson said.

A spokesperson for the Kenosha County Sheriff’s Department declined to comment, telling The Epoch Times in an email that the matter was behind handled by police. A spokesman for the police department did not pick up the phone or return a voicemail.

Jonathan Turley, a professor at the George Washington University Law School, said in a blog post that “the seriousness of this incident cannot be overstated if true.”

“Being followed can add an intimidating element for a jury in a city that was previously subject to extensive violence and rioting,” he said.

Jurors in Rittenhouse’s trial began deliberating Tuesday after closing arguments. The teenager faces up to life in prison on multiple homicide charges stemming from his shooting three men in Kenosha on Aug. 25, 2020.

Rittenhouse and his lawyers said the shootings were done in self-defense while prosecutors argued the teenager was negligent in traveling to the city and carrying a gun amidst the chaos there.

The possible interference in the trial comes after the defense entered a fresh motion for a mistrial. Lawyers said they received an inferior version of drone footage from the FBI that was captured on the night of the shootings. A prosecutor said he texted the video to the defense and blamed what happened on the type of phone they had.