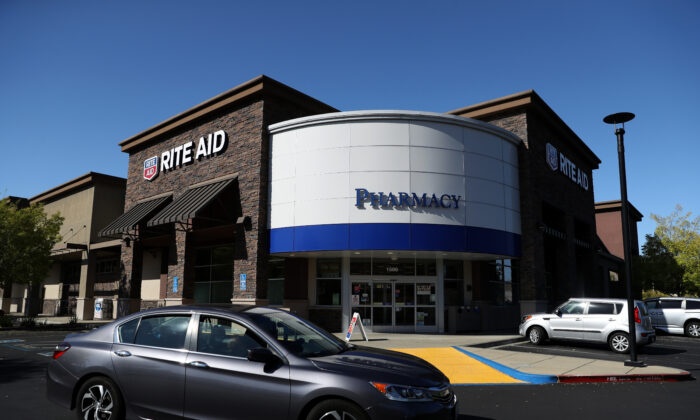 The Rite Aid log is displayed on the exterior of a Rite Aid pharmacy in San Rafael, California, on Sept. 26, 2019. (Justin Sullivan/Getty Images)
US News

CVS and Rite Aid told the Wall Street Journal and other news outlets on Tuesday that they will place limits on buying Plan B, One-Step, and Aftera medications—which are brand-name products for the drug Levonorgestrel. Walmart also said it would place limits on the drugs.

Walgreens’ website initially stated that there would be limits on the drugs as well. The firm later told the WSJ that the restriction was an error. Deliveries of the drugs aren’t available at this time due to demand, a spokesperson told The New York Times.

A Walmart spokesperson said the company is limiting emergency contraception medication purchases to four to six per customer.

After the ruling, some on social media claimed that women should stockpile morning-after pills. Planned Parenthood, one of the leading abortion groups in the United States, issued a statement Monday warning not to stockpile the drugs because they have a short shelf life.

The Supreme Court in a 5–4 ruling on June 24 struck down Roe v. Wade, with the majority arguing that only states and legislatures should have the power to enact or restrict abortion. Writing for the majority, Justice Samuel Alito wrote that the Constitution makes no reference to abortion and argued the 1973 landmark decision was flawed from the start.

“We end this opinion where we began. Abortion presents a profound moral question,” Alito wrote. “The Constitution does not prohibit the citizens of each State from regulating or prohibiting abortion. Roe and Casey arrogated that authority,” referring to the 1992 decision, Planned Parenthood v. Casey, which was also struck down Friday. “We now overrule those decisions and return that authority to the people and their elected representatives.”

“Roe was egregiously wrong from the start,” he added in the opinion. “Its reasoning was exceptionally weak, and the decision has had damaging consequences. And far from bringing about a national settlement of the abortion issue, Roe and Casey have enflamed debate and deepened division.”

Following the decision, protesters turned up in front of Supreme Court justices’ homes, with left-wing activist groups announcing more plans to protest on Monday. The U.S. Capitol Police arrested two people Saturday for destruction of property amid protests at the Supreme Court