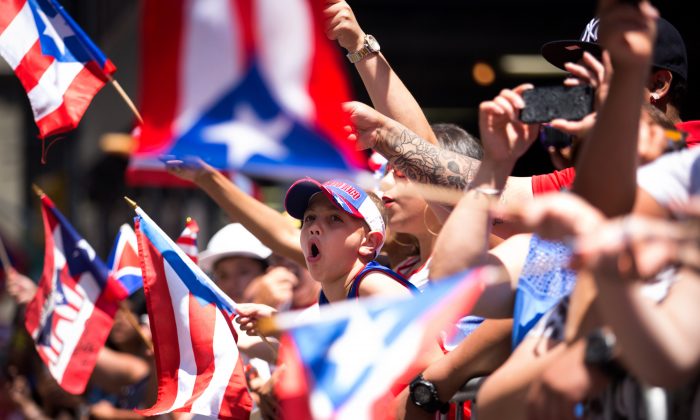 “Hallelujah! Bienvenidos a todos,” the cardinal yelled out to the Puerto Rican Day Parade crowd, meaning “welcome to all.”

At 83, on a convertible car, Moreno was the grand marshal of the festivities that turned more than 1 million spectators into a sea of red, white, and blue. Topped by a single star, they’re the colors of the Puerto Rican flag that were also splashed across 20,000 marchers moving up the avenue from 44th Street to 79th Street.

Dolan, who is archbishop of the city’s Roman Catholic archdiocese, offered blessings to the mostly Catholic participants. Dolan then lifted his straw hat to reveal a red skullcap he plopped onto the heads of several bemused boys.

Stephanie Placeres of Boston has been coming to New York for a dozen years to see the parade.

“We always stand here, at the same spot in the 50s; I have a parking lot that I always go to, and there’s bathrooms right there in Trump Tower,” said Placeres, flanked by her husband, mother-in-law, and three young children.

“We’re here because of the pride. It’s overwhelming, amazing,” she said, raising her voice above the noise that hit fever pitch, with hand-held horns and whistles from the sidelines. Placeres, 32, who heads a team of security officers on Harvard University campus, said she’s been noticing a tighter New York police presence at the festivities. She said the events are more organized and disciplined since the violence and drunken mayhem that followed the event in 2000.

New York Mayor Bill de Blasio walked all 35 blocks up Fifth, noting “the extraordinary contribution to this city by the Puerto Rican people. This is a community that over the last century has been one of the foundations of this city.”

Lydia Rodriguez of Brooklyn stood out with a vibrant feathered headdress she said represents the Taino indigenous peoples who historically inhabited many Caribbean islands.

“People don’t know much about them here,” said Rodriguez, 40, proudly raising her adorned head to watch the Puerto Rican parade for her 23rd time.