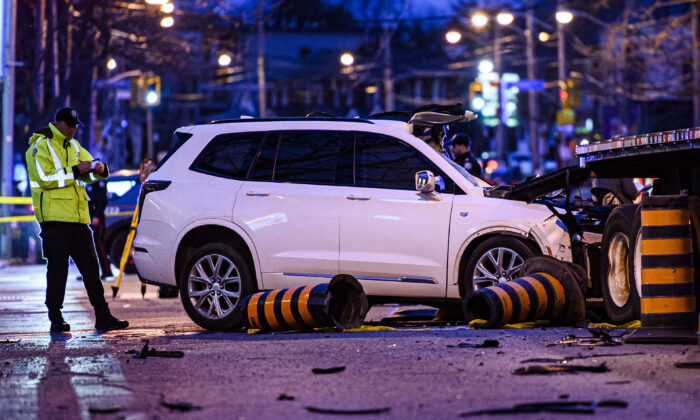 Police attend the scene of a collision in the west end of Toronto on March 31, 2022. (Christopher Katsarov/The Canadian Press)
By Noé Chartier

Your risk of getting into a traffic crash are significantly higher if you’re hesitant to get vaccinated against COVID-19, says a government-funded study released in December.

“Vaccine hesitancy is a reflection of psychology that might also contribute to traffic safety,” it says, concluding that “An awareness of these risks might help to encourage more COVID vaccination.”

A premise of the study is that “vaccination uptake has stalled despite being safe, effective, and free.”

The study was financed by government entities, but one of them said a link was not evident between the study and the Encouraging Vaccine Confidence federal program, despite the lead author’s participation.

The study was led by Dr. Donald A. Redelmeier at the Sunnybrook Research Institute and published in the American Journal of Medicine on Dec. 2.

“Physicians counseling patients who decline COVID-19 vaccination could consider safety reminders so their patients do not become traffic statistics,” said Redelmeier in a Dec. 12 statement from Sunnybrook announcing the study.

Research was conducted with data from the province of Ontario and included individuals of 18 years or older on July 31, 2021.

During the month that followed, the study says that 6682 individuals required emergency care following a traffic crash.

Divided along age groups, the data shows the relative risk of a serious traffic crash was higher for the vaccinated individuals in the over 65 years old category.

This is the more vaccinated age group who would typically be on the roads less due to being outside the workforce.

The lack of data on driving exposure of the different groups was cited as a study limitation. The authors said, citing a previous study from Redelmeier, that a 100 percent increase in driving distance is “unlikely to explain the magnitude of traffic risks observed in this study.”

Passengers involved in crashes, whose impact on the circumstances is unknown, were also counted in the study, and so were pedestrians. Both unvaccinated groups were shown to also be at a higher risk of an accident.

Another limitation identified is that “correlation does not mean causality” without the causes of vaccine hesitancy or risky driving being explored.

However the study says that “distrust of government or belief in freedom” is one possibility explaining both vaccination preferences and increased involvement in car crashes.

The authors said the findings could justify insurance companies raising premiums for the unvaccinated.

“Together, the findings suggest that unvaccinated adults need to be careful indoors with other people and outside with surrounding traffic.”

Several questions sent to Dr. Redelmeir were left unanswered, including whether he could share the underlying data and what was the rationale to include passengers.

The Epoch Times also asked for a clarification on the conclusion which suggests that if an individual was hesitant up to a certain point, and during that time of hesitancy he was more of a danger to himself and others on the road, once he accepts vaccination his psychology would change to the point of starting to respect rules of the road more closely.

The study received funding from various government entities and is being reported on after recently receiving statements from some parties.

Entities funding the studies were identified as the Canada Research Chair in Medical Decision Sciences, the Canadian Institutes of Health Research (CIHR), the Graduate Diploma in Health Research at the University of Toronto, and the National Sciences & Engineering Research Council of Canada (NSERC).

Redelmeier and Sunnybrook also received $50,000 from the Encouraging Vaccine Confidence in Canada PromoScience grants, with an agreement date of July 1, 2021, to June 30, 2022.

This funding program, which seeks to “deliver evidence-based, vaccine-promoting information to key communities,” is managed jointly by the NSERC, the CIHR, and the Social Sciences and Humanities Research Council (SSHRC).

NSERC spokesman Martin Leroux told The Epoch Times the grant applications are peer reviewed by experts, but are not to be released to the public.

“All applications, and subsequent communication between NSERC and applicants, are confidential,” he says.

He also said there “does not appear to be a link between the traffic study and the NSERC VCC [Vaccine Confidence in Canada] grant,” but that it is “likely that one, or more, of the study authors has benefitted from NSERC support, either directly or as a student through an NSERC grant to their supervisor.”

Over $2.4 million has been disbursed to researchers under the Encouraging Vaccine Confidence in Canada program, according to available data online, with most for an amount around $50,000.

Additional federal funding for similar research has also been given under different programs, such as COVID-19 Vaccine Confidence.

The Epoch Times previously reported that the Public Health Agency of Canada has hired a social media intelligence collection company to obtain large amounts of data on the unvaccinated in order to better target them with pro-vaccination messaging.