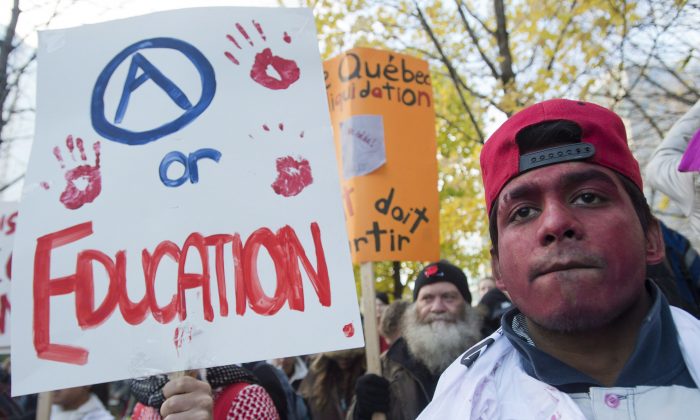 Demonstrators march in the streets of downtown Montreal to protest a proposed tuition fee hike, Nov. 22, 2012. Canadians are becoming increasingly concerned about the ever-rising costs of post-secondary education and who will pay for them, according to several new polls. (The Canadian Press/Graham Hughes)
Canada

Rising Tuition Fees a Burden on Both Parents and Students

Canadians are becoming increasingly concerned about the ever-rising costs of post-secondary education and who will pay for them, according to a series of polls released this week.

A CIBC poll comparing parent and student views on tuition found that 67 percent of parents are willing to pay for their children’s education, which they estimate at a total cost of $64,000. In contrast, students reported they expected their parents to pay 33 percent of expenses, and expect a total debt load of $25,000 when they graduate.

“Looking at that disconnect about who is paying for it, it really is a shared burden between the parents and the kids,” said Jamie Golombek, managing director of tax and estate planning at CIBC.

“Parents are willing to pay for most of it, but kids think they are only paying a third of it.”

A Bank of Montreal poll also released this week showed that 79 percent of parents are concerned about rising tuition costs and a further 70 percent are concerned their children will not be able to afford it.

“I do think there is reason to be concerned. Tuition fees have increased drastically faster than the rate of inflation over the past decade,” said Jessica McCormick, national chairperson of the Canadian Federation of Students.

The Canadian Centre for Policy Alternatives estimates that tuition inflation has skyrocketed over the last 10 years, rising 44 percent across the country.

“In terms of costs, there are an increasing number of people who are utilizing financial aid because they can’t pay those tuition fees up front,” said McCormick.

Well-paid summer jobs for students have also been dwindling. A recent CCPA study found that federal student hires have declined from 10,894 in 2009 to under 7,000 over the last two summers.

“It is becoming increasingly difficult for students to find jobs over the summer, ones that pay enough to cover the costs of post-secondary education,” said McCormick.

In a poll earlier this year commissioned by the Canadian Alliance of Student Association, nearly half of parents (45 percent) reported using savings to pay for tuition costs, 43 percent reported getting a loan or line of credit, 51 percent reported working another job, and 23 percent remortgaged a home.

“It is not just difficult for students. It is difficult for parents. People are working longer and in less secure work, which makes it more difficult for them to save up for the children’s education as well,” said McCormick.