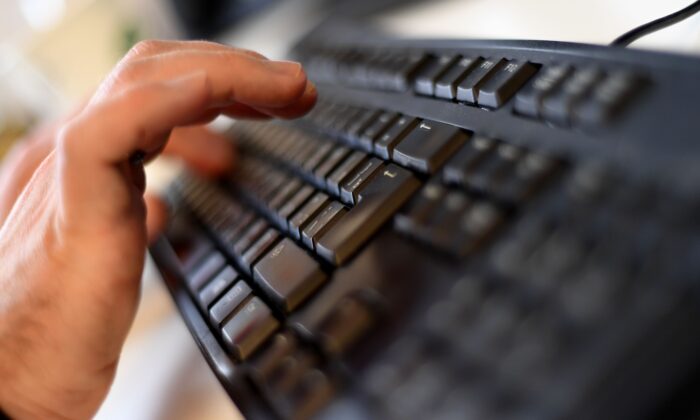 An employee typing on a computer keyboard at the headquarters of Internet security giant Kaspersky in Moscow on Oct. 17, 2016. (Kirill Kudryavtsev/AFP via Getty Images)
Australia

Increasing surveillance of work-at-home employees could trigger a backlash or “employee activism” in the next three to five years.

A recent survey of Australia’s largest corporations explored how the country’s senior executives would tackle a range of issues around employee health and social justice issues.

Around 61 percent of senior executives in Australia told global law firm Herbert Smith Freehills’ that they expected a rise in employee activism over issues such as increased surveillance of home-based workers (40 percent of respondents), pay and benefits (36 percent), environmental, social, and governance issues (36 percent), and vaccine status (15 percent).

With the onset of the pandemic in 2020, the survey found that many managers delegated increased authority to remote-based employees to manage their own workloads. However, sales of software to monitor activity did increase.

One company in Australia saw a 200 percent increase in requests for trials of its product. Such software would involve webcam access, random screenshot monitoring, and keystroke monitoring.

Around 90 percent of companies in Asia were also planning to use digital tools to monitor their employees, followed by North America (around 80 percent), and Australia (around 77 percent).

Further, around 43 percent of employers were also planning to differentiate pay rates between remote and office-based workers, with remote workers being paid less because they could save time and money on travel and subsistence costs.

Natalie Gaspar, partner at Herbert Smith Freehills, said employers had to be ready to tackle a range of “thorny issues” that could be a “lightning rod” for employee activism.

“Much of this is unchartered territory for Australian businesses,s and employer-employee relationships will be tested. For employers that get it wrong, or are perceived to get it wrong, the risk to reputation and revenue has the potential to be significant,” she said in a press release on Sept. 22.

Fellow partner Drew Pearson said the pandemic posed “complex questions” to employers on their responsibilities for the welfare of their workers.

“The rise of hybrid working and rapid changes in policies around pay and surveillance will create further legal and ethical challenges for employers,” he added.

The global survey reached out to 375 companies with over 1,000 employees and £250 million (AU$470 million) in revenue. Around 20 percent of the businesses were in Australia.

Companies were also wary of increased activism around social justice issues (Black Lives Matter, cancel culture, and climate change) with 94 percent of companies globally taking measures to mitigate such risks, an increase of 46 percent from 2019.

In Australia, 97 percent of senior executives said they had taken action to restrict or control employee actions, with 43 percent of restrictions described as “high” and 55 percent described as “moderate.”

Such action could involve Codes of Conduct governing how employees behave outside the workplace, as well as their participation in events such as attending marches, signing petitions, or speaking publicly on specific issues.