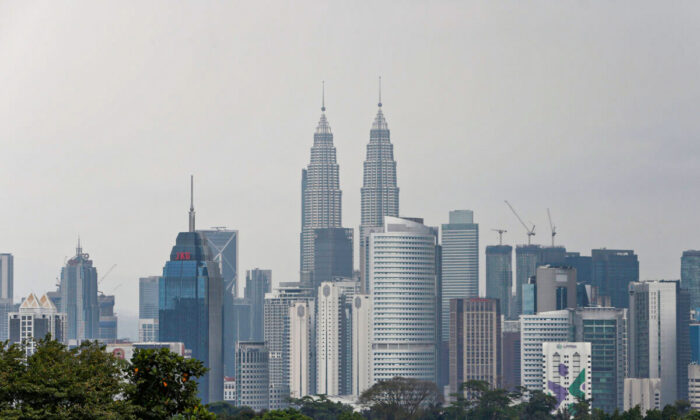 A view of the Kuala Lumpur city skyline in Malaysia on Feb. 7, 2018. (Lai Seng Sin/Reuters)
Inflation

Malaysia is projected to spend roughly $17.5 billion on subsidies this year, including the recently announced $83 million in chicken and egg subsidies, to keep inflation under control.

Finance Minister Zafrul Abdul Aziz said on June 30 that Malaysia’s inflation rate could increase by 11.4 percent in May, but the subsidy policy has helped keep inflation at 2.8 percent, the state-run outlet Bernama reported.

Zafrul said the country’s open economy was hurt by global inflationary pressures, with Brent crude oil prices rising to $100 per barrel and disruptions in the global supply chain, resulting in an increase in food prices.

The Malaysian government will provide an additional $142 million in cash assistance to protect the low-income families “from the burden of the rising cost of living,” he said.

According to local reports, the country’s core inflation rate rose to 3.3 percent year-on-year in April, the highest rate since January 2012, when it reached 3.5 percent.

“It is likely that global inflation will remain high for some time, and may even increase further before it stabilizes and gets better. Likewise in Singapore, we must brace ourselves for higher prices over the next few months,” the ministry said in a statement.

Japan allocated $48 billion to fund subsidies and provide cash payouts to low-income households as part of efforts to cushion the economic blow from rising fuel and raw material prices.

The country’s core inflation rate was 2.1 percent in April. The allocated budget will include government expenditures in tackling soaring fuel prices and ensuring a steady supply of energy, raw materials, and food.

Tokyo is leaning on both generous fiscal stimulus as well as ultra-easy monetary policy to support the economy, a sharp contrast to the shift toward interest rate hikes seen in the United States, Europe, and elsewhere.

Thailand extended its relief measures for three months to September, including a monthly subsidy of 100 baht ($2.83) for cooking gas, and freezing vehicle gas prices for taxi drivers.

The measures came as Thai headline inflation hit a near 14-year high of 7.1 percent in May, driven by rising oil prices.

The government will also seek refineries and gas separation plants to contribute some profits to the state oil fund for three months, spokesperson Thanakorn Wangboonkongchana said.

Thanakorn said that companies would be offered tax deductions on expenses related to seminars and exhibitions between July and December, and that an existing scheme allowing locals to travel domestically would be extended until October.