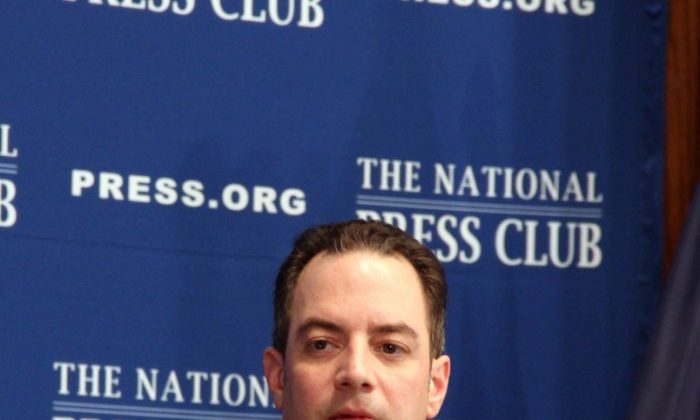 (L-R) Zori Fonalledas, Glenn McCall, Sally Bradshaw, and Ari Fleischer, four of five co-authors of a new report on how to revitalize the Republican Party, at the launch of a post-election report at the National Press Club in Washington, D.C., on March 18, 2013. (Shar Adams/The Epoch Times)
US

Rising Above the Rifts, Republican Party Lays Out Strategy to Win

WASHINGTON—After Republicans lost the last five out of six elections, the Republican National Committee (RNC) released a report Monday that they hope will put Republicans on a path to success.

The real challenge, however, may lie in overcoming deep rifts within the party.

“Today we make a fresh beginning—it’s about winning elections,” said RNC Chairman Reince Priebus at the launch of the report at the National Press Club.

“There’s no one reason we lost,” he said. “Our message was weak; our ground game was insufficient; we weren’t inclusive; we were behind in both data and digital; and our primary and debate process needed improvement.”

Not all agree with the assessment, and rifts within the GOP will be difficult to overcome.

“Americans and those in the tea party movement don’t need an ‘autopsy’ report from RNC to know they failed to promote our principles—and lost because of it,” Jenny Beth Martin, cofounder and head of the Tea Party Patriots, said in a statement.

The report does not dwell on policy or social issues, although it does embrace comprehensive immigration reform. Instead, it focuses on structural recommendations, ways to improve its image, and ways broaden its base.

Specific recommendations include more engagement from the grass roots up; a $10 million marketing campaign targeted particularly at women, youth, and minorities; an earlier national convention and less primary debates; and better data collection, analytic, and use of technology.

A result of interactions with over 50,000 participants, the report found that the GOP is perceived as “scary,” “narrow-minded,” and “out of touch,” some describing it as a “party of stuffy old men.”

Priebus stressed that the changes would not threaten the party’s conservative principals, but he emphasized that the Republican Party must be “a party that is welcoming and inclusive of all voters.”

The challenges for the GOP are large, with the disconnect from voters most obvious among minorities, women, and the young.

Women represent the majority of voters, yet Barack Obama won by 11 points in 2012, according Sally Bradshaw, a key adviser to former Gov. Jeb Bush (R-Fla.).

“We have to grow ranks and encourage women within our party,” she told the press Monday. “We have to have a seat at the table; we are part of the team.”

Bradshaw was one of five Republicans selected by the RNC to compile the report. Co-authors Ari Fleischer, CNN political commentator and former press secretary for President George W. Bush; Henry Barbour, a GOP strategist and nephew of former Gov. Haley Barbour (R-Miss.); Zori Fonalledas of Puerto Rico; and Glenn McCall of South Carolina were also at the event.

Fonalledas said that when it came to voting, policies like education, jobs, or the economy were not key drivers for minorities. “If they think we don’t want them here, they will close their ears to our policies,” she said.

Glenn McCall said that young voters are increasingly “put off” by the GOP. “We don’t have to agree on every issue, but we have to make sure young people don’t see the party as intolerant and unaccepting,” she said.

The report recommends that Republicans establish offices in minority communities, recruit staff and candidates from minority groups, and appoint communications directors in key states who will coordinate engagement with minority organizations.

For young people—particularly those under 30, the majority of whom voted for Obama—the report looks at a variety of ways to engage, including the formation of a Celebrity Task Force and regular appearances by Republican leaders on popular shows like “The Colbert Report,” “The Daily Show,” and “MTV.”

Finding common ground within the party, however, may be the greater challenge.

Whether purposely timed or not, the report was launched just as the annual Conservative Political Action Conference (CPAC) was winding down.

CPAC draws on a particular conservative constituency within the Republican Party, and this year seemed only to highlight divisions.

Govs. Chris Christie (R-N.J.) and Bob McDonnell (R-Va.), the two most popular GOP governors, were not included in the lineup of speakers—Christie was singled out for showing gratitude to Obama for his help after Hurricane Sandy.

The report specifically highlights the need to learn from successes at the state level, as 30 states are presently managed by Republican governors.

“Conservative ideas are resonating in many of these [heartland] states,” said Fleischer.

Conservative stalwarts also expressed cynicism toward other factions: Sarah Palin drew applause at the CPAC for a jab at Republican strategist Karl Rove, with a call to “furlough the consultants” and send “the architect back to Texas.”

Mitt Romney, although well received at the conference in his first public speech since his presidential loss, was the recipient of a swipe from Gov. Rick Perry (R-Texas). Perry blamed the 2008 and 2012 election losses on the Republican leadership’s selecting Romney and the earlier Sen. John McCain (R-Ariz.) because they were not conservative enough.

Undaunted Priebus said that the party welcomes all groups, saying, “There is more that unites us than you know.”

Obviously energized by the report and its catch cry “onward to victory,” Priebus said the party was already preparing for the 2014 congressional and the 2016 presidential elections. Donors were on board with the report’s recommendations and staff would be in place by the end of the summer.

“We have never put this many paid workers on the ground this early in an off year,” he said.

Explaining the inspiration behind the report, Priebus said, “We want to build our party and we want to do it with bold strokes. We want to show we are up to the challenge.”