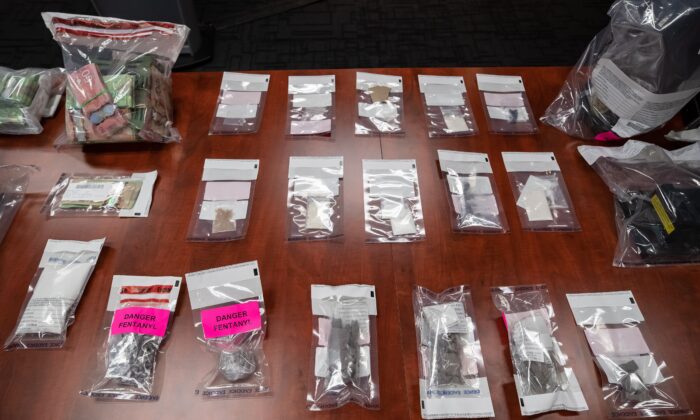 A seizure of illegal drugs and cash is displayed during a news conference at Surrey RCMP Headquarters, in Surrey, B.C., on Sept. 3, 2020. (Darryl Dyck/The Canadian Press)
Canada

A national substance use research organization is warning about a new type of opioid that is increasingly appearing in Canada’s illegal drug supply.

In an alert issued in March, the Canadian Centre on Substance Use and Addiction (CCSA) warned there is a rising presence in the drug supply of potent synthetic opioids referred to as nitazenes that are “several times more potent than fentanyl.”

Nitazenes usually appear unexpectedly in drugs assumed to contain other types of opioids like fentanyl, oxycodone, and non-medical benzodiazepines, said the CCSA, while noting the substance was first identified in Canada’s unregulated drug supply in 2019.

“They were developed 60 years ago as potential pain relief medication, but were never approved for clinical use.”

The centre noted that even though nitazenes were only detected in less than 1 percent of samples analyzed by Health Canada’s Drug Analysis Service (HC DAS) in 2021, the percentage was a “four-fold increase” compared to 2020.

Sarah Konefal, research and policy analyst at the CCSA, said the presence of nitazenes is likely underestimated, given some drug-checking services in Canada don’t have the tools to actually detect this type of substance.

“One of the concerns is that we’re only looking at the tip of the iceberg,” she said in an interview with The Canadian Press, reported on May 21.

Konefal added that the centre issued a similar alert when fentanyl first appeared in Canada in 2013. The prevalence of fentanyl in Canada’s drug supply started picking up in 2015, she said.

In April 2016, British Columbia declared a public health emergency due to the significant rise in opioid-related overdose deaths reported in the province since the beginning of that year.

Citing data from HC DAS, the CCSA said the majority of samples with nitazenes came from Ontario at 64 percent, followed by a quarter of samples coming from Quebec, in 2021.

In addition, only one type of nitazene was detected in January 2020. But in a span of two years, the overall case counts increased, as well as the types of nitazenes detected, the data showed.

“Note that more than one nitazene can be identified in a single sample,” the CCSA said.

“In 2021, approximately 14 percent of nitazene-positive samples contained two or more.”

Konefal said the fact that more different types of nitazenes are showing up is an indication that “probably the reach of nitazenes is expanding.”

Because newer opioids in the unregulated drug supply, like nitazenes and benzodiazepines, tend to show up in drugs with fentanyl, the risk of people overdosing increases, she said.

Given that nitazenes are more potent, along with the fact that they’re in drugs that have the same effect, it will increase risk of opioid poisoning, she added.

In an October 2021 brief, Public Health Ontario said the risk of nitazenes is “likely moderate to high, with a high degree of uncertainty.”

“The presence of these substances is increasing in Ontario and they pose an increased risk of severe overdose, particularly when present with other sedating substances,” the agency said.

The deaths of four people in Ontario have been directly attributed to nitazenes, according to Stephanie Rea, spokesperson for the Office of the Chief Coroner. Nitazenes have been detected in the examination of other deaths, and the investigations are still underway, Rea told The Canadian Press.

The CCSA said overdoses involving nitazenes may be difficult to reverse and might require extra doses of naloxone.

“But protocols around this are not yet clear,” it said.

The Public Health Agency of Canada reported an estimated 26,690 Canadians died from an apparent opioid-related overdose between January 2016 and September 2021, in its latest update in March.