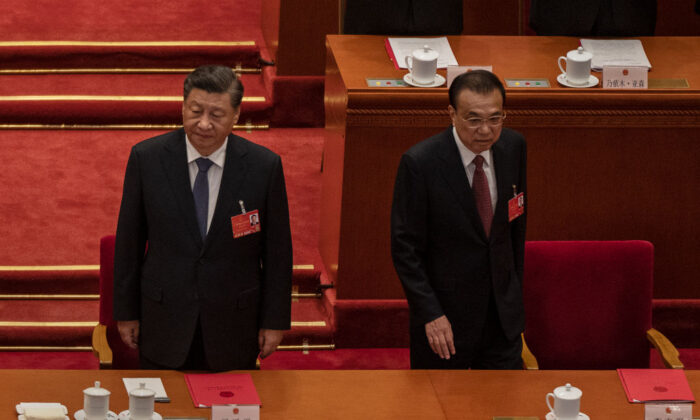 Chinese leader Xi Jinping (L) and Premier Li Keqiang arrive for the closing session of the National People's Congress at the Great Hall of the People in Beijing on March 11, 2022. (Kevin Frayer/Getty Images)
Thinking About China

The Chinese yuan (a.k.a. renminbi) is on pace to drop the most against the U.S. dollar in history as the world’s two biggest economies carve divergent paths in monetary policy. On Sept. 15, it broke the psychologically important 7 yuan to 1 U.S. dollar barrier.

The U.S. Federal Reserve is poised to continue its tightening measures to combat inflation. That itself has given a boost to the dollar compared to the euro (dragged down by a struggling EU economy and impending energy war with Russia) and the yuan.

With respect to the yuan, which has dropped almost 9 percent year-to-date against the dollar, the currency is on course to post its weakest annual showing against the dollar since China loosened the yuan’s dollar peg back in 2005.

And as the Fed continues to hike rates—U.S. inflation readings remain stubbornly high—the People’s Bank of China is expected to maintain its loose monetary policy to keep a struggling economy afloat. That should lead the yuan to further weaken.

This is no aberration. As the Chinese Communist Party (CCP) prepares for its annual meeting in October, where regime boss Xi Jinping is expected to receive a third-term as the nation’s de facto leader, China’s economy has been on a decidedly different path than the U.S. economy for some time.

For months now, global forecasters have cut their China GDP estimates. Beijing itself came out over the summer and admitted that it is unlikely the country will meet its 2022 goal of 5.5 percent headline official GDP growth. Most banks have reforecast the growth in the mid 2 percent to 3 percent range.

The country has been hurt by Beijing’s punitive “zero-COVID” policy, which shut down the key economic centers Shanghai and Shenzhen earlier this year and continues to plague certain areas. COVID hotspots continuously shift, leading to on-again, off-again mass testing and lockdowns throughout the country.

This summer, China struggled with droughts and heat waves, putting strain on its power grid, which also led to factory production cuts in parts of the country.

Unemployment is a key worry. Youth unemployment in urban areas was approaching 20 percent in July, continuing an elevated trend that has become difficult to assuage given weak consumer sentiment and spending trends.

The property market, whose downturn is about to head into a third year, remains in the doldrums. The real estate sector accounts for as much as a third of China’s GDP. But it’s a double-edged sword, as past growth has created massive property and debt bubbles that Beijing has been attempting to rein in. Both property prices and home sales have been declining.

None of this is breaking news. But the length and depth of this Chinese economic downturn could be more severe than those of the past.

It’s become such a critical issue that on Sept. 12, a federal holiday in China for the Mid-Autumn Festival, no less, the CCP premier Li Keqiang and all four vice ministers headed an “emergency meeting” to discuss the economy, review working group reports, and brainstorm ways to stabilize its free fall.

Judging from domestic and online discourse, more economic stimulus measures are coming. They could include items such as more infrastructure spending and broad relaxation of home purchase restrictions. The former would temporarily create jobs, and the latter would help a sagging real estate sector and create cash flows for struggling developers and cash-strapped municipalities.

Li has been tasked by Xi to fix the economy, and failing at it could be an easy pretense for his ouster from the Politburo of the Standing Committee after his term as premier ends. Xi recently remarked that China had not yet “aggressively increased the fiscal deficit” to help the economy.

Reading between the lines, it appears that Beijing may do just that which would be another contributor to the yuan’s decline.

The currency’s further weakening is now so obvious that Bloomberg—a longtime China bull—recently published a piece highlighting that hedge fund Crescat Capital’s long-term bet against the Chinese currency may finally pay off after eight long years.

Yet Bloomberg was quick to point out that the hedge fund’s position is still among the minority, citing “China’s large savings, high mortgage down payments, and the strong government control of banks” as reasons against an uncontrolled financial crisis.

As this once-contrarian view moves firmly into the mainstream, China’s currency will be under severe pressure from FX traders and hedge funds.