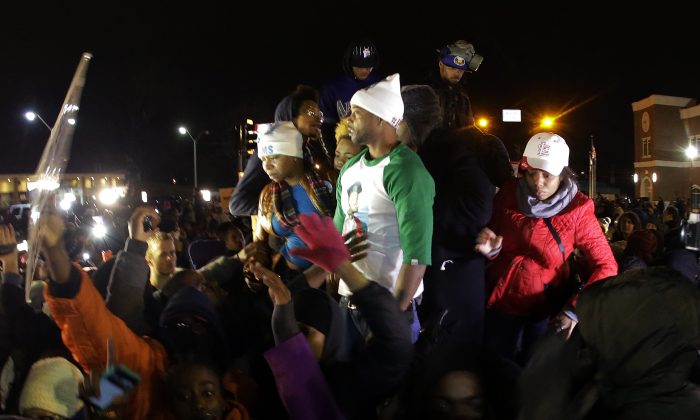 Lesley McSpadden, the mother of Michael Brown, left standing on the top of a car, reacts as she listens to the announcement of the grand jury decision Monday, Nov. 24, 2014, in Ferguson, Mo. A grand jury has decided not to indict Ferguson police officer Darren Wilson in the death of Michael Brown, the unarmed, black 18-year-old whose fatal shooting sparked sometimes violent protests. (AP Photo/Charlie Riedel)
Ferguson

UPDATE on Tuesday: There were more protests in New York City, Los Angeles, Washington DC, and other major cities across the US.

Following the grand jury’s decision not to indict Ferguson, Missouri, police officer Darren Wilson in the shooting death of Michael Brown on Monday, there were protests across the US.  On Twitter, some people were seemingly spreading rumors about “riots” going on in other cities.

UPDATE: As of early Tuesday morning EST, some protesters in Oakland threw bottles and other objects at police after they declared it an unlawful assembly; some fires were also started. I-580 was also blocked by protesters in the Bay Area. Another report said that protesters were attempting to take over the Manhattan Bridge and shut down the Triboro Bridge in New York City. In Seattle, there were reports of protesters throwing fireworks at police and in Los Angeles, some reported that rocks were thrown at CHP officers.

UPDATE: Traffic still at a standstill after #Ferguson protesters walk onto I-580 in #Oakland: http://t.co/oLFX9oJnu4 pic.twitter.com/8kU10GmnRd

These were thrown at #CHP and @oaklandpoliceca officers tonight pic.twitter.com/tZ5zNZH81m

The were rumors on social media sites including Twitter that some of the protests would devolve into rioting.

One person wrote: “My mom just texted me saying that there’s a riot next to her job over ferguson in Oakland.”

Said another, “Wow. Seeing some of the pictures from Oakland is crazy. This is not a “riot”. This is a movement.”

“I am finding a riot in Los Angeles right now and JOINING IT. #Ferguson #JusticeForMikeBrown,” one person wrote on Twitter.

“@broderick: fyi Macklemore is at the #Ferguson protest in Seattle via @bettinahansen pic.twitter.com/BEyerKZC8x” more reason to riot

Said another, “I understand that the Ferguson community is upset, but it’s stupid that a few residents of Los Angeles are willing to participate in a riot.”

One added: “Sooo there’s a riot in NewYork… And I witnessed it.”

There were protests in Los Angeles, Oakland, Chicago, Sacramento, New York, Washington DC, and Seattle over the grand jury’s decision. At least several people were arrested in Times Square in Manhattan.

I repeat: This is not a riot. It’s a protest in the nation’s capital: pic.twitter.com/UaF0buV1eR

According to report from The Associated  Press, the protests in New York and Los Angeles were done “intially peacefully.”

The protesters were marching, waving signs and shouted “Hands Up! Don’t Shoot,” referring to a slogan that has become a rallying cry against police killings. The protests were planned before the announcement not to charge Wilson, AP reported.

In several large cities like Los Angeles, New York, and Chicago, police departments said they would be prepared for large demonstrations with the chance of some violence.

During the initial protests in Ferguson, there was reports of rioting, looting, vandalism, and assaults.

Police in other cities said the  gatherings were mainly  peaceful immediately following the announcement on Monday.

President Barack Obama called for peace and calm following the grand jury indictment–a statement that was in stark contrast to the scenes unfolding in Ferguson.

“We are a nation built on the rule of law, so we need to accept that this decision was the grand jury’s to make,” Obama said in a White House statement on Monday.

The family of Michael Brown also issued a statement about the indictment.

“We are profoundly disappointed that the killer of our child will not face the consequence of his actions. While we understand that many others share our pain, we ask that you channel your frustration in ways that will make a positive change. We need to work together to fix the system that allowed this to happen,” reads the statement

Protesters take to the #Seattle streets to block traffic in a “die in” in response to #Ferguson ruling. #MichaelBrown pic.twitter.com/Mhn7UUd19Q

“@KTVU: Crowd of #Ferguson protesters at 14th and Broadway in #Oakland from #NewsChopper2 pic.twitter.com/AzP13FdSBK” in front of my work

FERGUSON: Walgreens is on fire. Flames shooting from within the building #Ferguson – @ShanHalligan pic.twitter.com/zcqSgSat6Z

Cities around the nation react to #Ferguson pic.twitter.com/QfpfUZs2wh

AP updates on the protests:

OAKLAND, Calif. (AP) — About 100 people holding signs that read “The People Say Guilty!” and “Missouri, Palestine, Justice Now!” are blocking an intersection in downtown Oakland to protest a grand jury decision not to indict a white police officer in the fatal shooting of an unarmed black teenager.

The crowd gathered Monday night at the intersection of 14th and Broadway after a line of police blocked them from getting on the on-ramp of a highway.

Minutes earlier some of the protesters lay down on the ground while others outlined their bodies in chalk.

In San Francisco, a few dozen people gathered in the Mission District chanting “No justice, no peace!”

SEATTLE (AP) — More than 100 demonstrators marched through Seattle on Monday night, joining thousands across the country in a protest of a grand jury decision not to indict a white police officer who killed an 18-year-old black man in Ferguson, Missouri.

Chanting “Black Lives Matter and “Hands Up, Don’t Shoot,” Seattle marchers stopped periodically to sit or lie down in city intersections, blocking traffic before moving on. Dozens of police officers watched the crowd.

Seattle Mayor Ed Murray declared that his city “is committed to the goals of racial and social justice” but also acknowledged that Seattle is “far from perfect.”

St. Louis County, Missouri, authorities earlier announced that Officer Darren Wilson will not be charged in the Aug. 9 shooting death of Michael Brown.