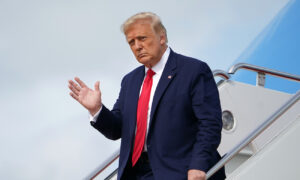 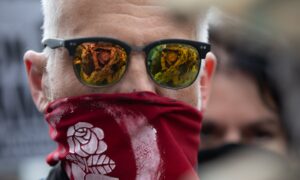 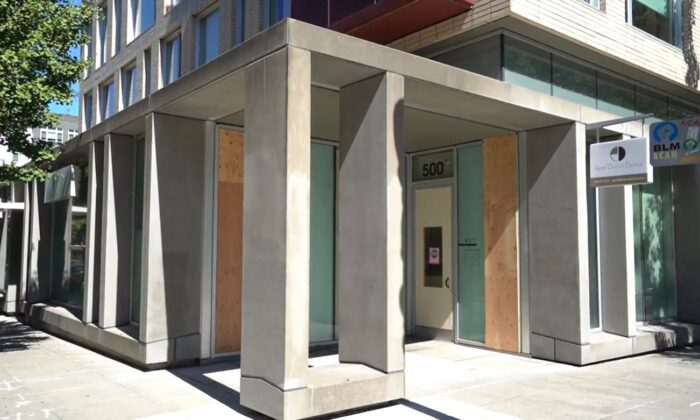 The arsonists who tried setting a business on the ground floor of a high-rise building in Portland on fire on Monday acted like insane people, the manager of the business told The Epoch Times.

“I would say arson is way more than crossing the line, especially in a high residential building,” said Eli Shemali, the clinic manager for Pearl District Dental. “That’s just an act of people without any sort of sanity, and I’m not sure what was going in on in people’s minds.”

Rioters marched to the building, a few miles north of downtown, because Mayor and Police Commissioner Ted Wheeler lives there.

Video footage showed several people using baseball bats to shatter glass windows and a door to gain access to the clinic before lighting a fire inside.

The incident drew a rare rebuke from Wheeler, who accused those responsible of “terrorizing families with children,” referencing how people live in the floors above the clinic.

The damage ended up being relatively minor because other people on the scene stepped in and stopped the agitators, Shemali said. Police officers also responded quickly.

“I think the protesters and the police combination really stopped what could have been a major disaster,” he said.

After 24 hours of working to repair the damage, the business reopened on Wednesday.

According to information Shemali received, two people were responsible for the arson and damage.

“I think they should be prosecuted, and I intend to press charges with the district attorney. We’ve been told that people committed multiple similar acts in the past and had not been prosecuted,” he said. “There’s no place for arson in our society, despite whether you agree with policies, or you don’t.”

“To the protesters: My message is, you seem to have lost your focus. And I think even if an official wanted to talk to you, your message is confusing. I would say unify and get a message and focus on the things you want changed,” he added.

Unrest has shaken Portland since May 28. Riots take place nearly every night, in various neighborhoods. Officials have failed to quell the unrest even as they decline offers of assistance from the federal government.

A man was shot dead over the weekend. The man linked to the shooting is a member of Antifa, a far-left, anarcho-communist group that’s helped foment rioting. No arrests have been made as of yet.

Unlike other businesses affected by the unrest, the dental clinic is not relocating, Shemali said.

“Absolutely not. We’re here. We’ve been in business for 20 years, and at this location for eight years. We have a good reputation in the community. We have a lot of clients that like this location,” he said.

“We will ride out the storm.”