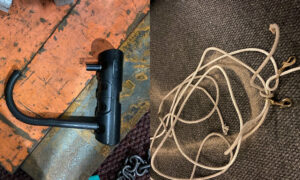 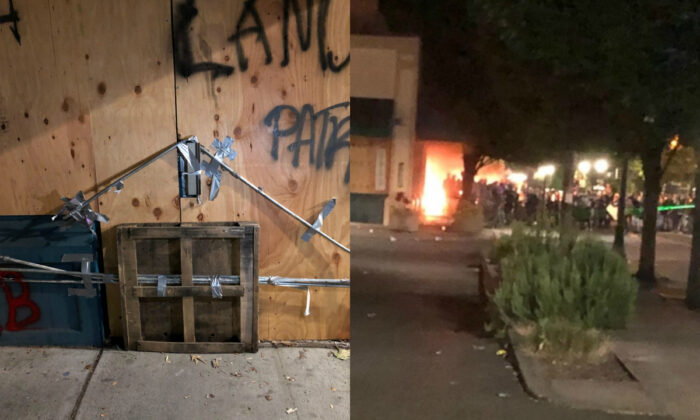 People participating in protests lit fires, looted, and damaged businesses in Portland in the early hours of Friday, the Portland Police Bureau said.

The group gathered at Fernhill Park before heading toward the bureau’s North Precinct. They carried supplies to build a fence and began erecting a barrier around 10 p.m. on Thursday in the area of the precinct, blocking traffic.

While building the fence, demonstrators began throwing projectiles, including glass bottles, at police officers, the bureau said in a press release.

Within an hour, the rioters began moving dumpsters and other large barriers, and some starting ramming dumpsters into large garage doors located on the west side of the precinct in a bid to enter the building.

The group then barricaded exit doors so people inside the building, including people in custody, couldn’t get out. The tactic has been common in gatherings in recent weeks in Portland.

Around midnight, one person in the crowd began shouting over a bullhorn that the group was “going to burn the building down.” Some rioters began hurling fireworks at officers over a barricade they built on one of the nearby streets.

By 1 a.m., several hundred demonstrators remained. Officers in a sound truck declared an unlawful assembly and warned the group would be subject to use of force or arrest if they didn’t disperse. The group didn’t disperse, so officers began trying to move the crowd.

“While performing this lawful action, demonstrators fought with officers. Furthermore, demonstrators shot officers with paintball rounds, causing officers not to be able to see out of their face shields. Around 1:40 a.m., a mortar was launched on to the roof of North Precinct. During this time, crowd control munitions were deployed,” the bureau stated.

Rioters set the north side of the precinct on fire, prompting officers to use chemical gas to disperse the crowd.

The group, around 3 a.m., began looting and setting fire to businesses in the area.

Numerous officers sustained minor injuries during the mayhem; one officer required hospital care for a serious injury but was expected to recover.

Four rioters were arrested, including for assault or attempted assaults on police officers.

“The dynamics of the demonstrators during this incident were more aggressive and violent than those seen in past weeks,” the bureau said.

Local reporters said some of the rioters turned their anger on reporters and others trying to document the scene, harassing and threatening them.

Video footage from local broadcasters showed a number of stores looted and damaged, with debris strewn across roads near the precinct.

Crews were cleaning up the debris Friday morning.

In a statement earlier Thursday, he said, “We understand the desire for reform in law enforcement; we have already implemented many suggested changes.”

Lovell shared a document (pdf) describing the changes before adding, “We know our work is not done and we must shift our focus and resources into productive collaboration and actions with the community.”