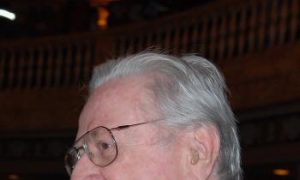 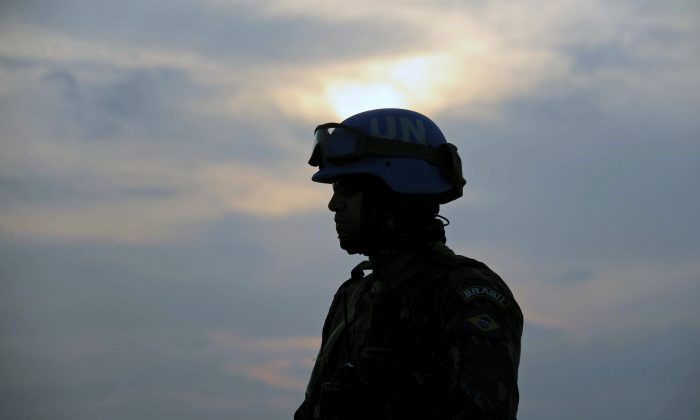 A Brazilian soldier with the MINUSTAH force stands during a patrol at a shantytown in Port-au-Prince, Haite, on March 2, 2013. (Vanderlei Almeida/AFP/Getty Images)
Americas

RIO DE JANEIRO—Rio de Janeiro will get a peacekeeping task force similar to the Brazilian mission in Haiti. The announcement was made early on Thursday by the Brazilian Army commander, Gen. Enzo Peri, during an official visit to the operations area, said Agencia Brasil, a Brazilian government news agency.

Gen. Peri said plans are already underway for the peacekeeping task force, which is unprecedented in Brazil, and are expected to be deployed by the end of the month. So far, police control has been used in the operations, while the army participated in the siege and isolation activities with around 800 men.

The army troops are preparing to occupy the interior of the “favelas” or slums of the German Complex (Complexo do Alemão) and Cruzeiro Village (Vila Cruzeiro), replacing police who in turn will focus more on weapon and drug seizures.

According to Rio’s Secretariat of Security, the operations in northern Rio’s German Complex were planned two years ago. The delay was due to lack of manpower and logistics, now solved by the participation of the armed forces.

In a debate televised by Globo News on Friday, anthropologist and former national Security Secretary Luiz Eduardo Soares said the idea that the police are good and the drug traffic is bad “is unfortunately misleading” in Brazil, as the “drug traffic persisted thanks to the active and enterprising partnership with the corrupt segments within the police.”

The former secretary said the current situation, where security operations have gained popular support, is an opportunity for the virtuous part of the police to grow in strength. But for him, this will only happen if all citizens believe in recovery, professionalization, and reform of the police and public institutions, which should act in an integrated manner.

Sociologist and researcher at the Institute of Social and Political Studies at the University of Rio de Janeiro (UERJ), Gláucio Smith, who was also present at the debate, agrees and expressed concern about the risk of soldiers being “contaminated” by bad elements in the police. “It is very difficult to prevent corruption from entering the military, because soldiers are local, or live in the community.”

The complexes have been under gunfire and weapon and drug seizures since the occupation of the German Complex by security forces on Sunday, Nov. 28. With 13 slums, this is the largest slum complexes of the city.

Involving some 2,600 law enforcement personnel, the occupations began after gangs launched a series of attacks on Nov. 21, which took place without resistance from the criminals, during which more than 100 vehicles were set on fire, spreading panic throughout the city. According to security officials, the gang attacks were a reaction from drug traffickers against the installation of the Pacification Police Units (PPUs) in the slums and surrounding areas.

The military police are now seeking a group of outlaws who took refuge in the Tijuca Forest, Abril News reported. On Thursday, the police arrested four leaders in other parts of Rio, according to the newspaper, O Estado. Many drug traffickers have fled the German Complex, some by sewer tunnel, to smaller slums and are now spread across the Baixada Fluminense, located in northern Rio.

So far, 20 traffickers suspected of ordering the attacks have been transferred to the Maximum Security Prison of Catanduvas in the state of Pará, which houses the country’s most dangerous criminals, the news agency, O Dia reported. The Brazilian Lawyer’s Order (OAB) has temporarily suspended and is suing lawyers of some of the main leaders in detention on the suspicion they passed commands onto the gangs.

Sergio Cabral, the Governor of Rio, said on Monday that the military should remain in the region until the PPUs are established, which is scheduled for the first half of 2011 involving potentially more than 2,000 police.

“We will not sleep on the laurels of past victories,” Cabral said at a forum on urban infrastructure for the 2016 Olympics. “We wake up early with new challenges which are to effectively regain territories still occupied by a parallel force. These steps require coordination with the Ministry of Defense and the Federal Police.”

José Mariano Beltrame, the Rio state security secretary, said the occupations will be long-term, according to the Security Secretariat’s website.

At the inauguration of the 13th PPU held in an area where a police helicopter was shot down by drug traffickers last year, Beltrame said, “God willing, next year, many other communities will be able to live as these 13 are living today. I’m sure that in another few years, we will deliver another Rio de Janeiro to society.”

Beltrame said the police are already preparing new units for communities in the south of the city at Vidigal and Rocinha, the largest slum in Latin America.

According to police, so far the operations have resulted in 223 arrests, 50 deaths, 109 burned out vehicles, and the seizure of 410 motorcycles and 200 stolen vehicles (many luxury), plus 40 tons of marijuana and cocaine, and a highly destructive arsenal of more than 200 weapons, including pistols, rifles, machine guns, shotguns, grenades, anti-tank bazookas, and anti-aircraft guns.

Some weapons seized are similar to those used by guerrillas and terrorists in other countries, and some have been diverted from the Brazilian army. The drugs are being incinerated.

Jéssica Almeida, Rio security sub-secretary, said that by police estimates the seizures have already caused a loss of US$59 million to the drug traffickers—a figure which impressed even the more experienced officers, reported Globo TV.

Gustavo Trompowski, professor at the College of War, spoke about the German Complex’s occupation.

“It gives a clear impression that that was the general headquarters, the center of their operation and their large commercial warehouse,” Trompowski said. “Within a few hours, the amount seized was four or five times that of the past year.”

The expert believes the weapons are being smuggled to the bandits via sea routes, Paraguay, and Colombian FARC guerrillas, who have connections with Brazilian drug traffic.

Last Thursday, the Federal Police began Operation Five Stars to thwart a scheme of international drug trafficking that has been under investigation since last year, according to the newspaper, O Estado. The drugs came from Bolivia and were distributed to six states. Six gang members have been arrested.

The federal government has also reinforced policing of the borders with Paraguay and Bolivia, where more than 80 percent of drugs and weapons enter Brazil and fuel organized crime. This measure, part of Operation Sentinel—which involves many levels of national security in conjunction with Paraguay—will support the operations in Rio and also help prevent the entry of logistical support and the flight of criminals.

On Monday, Justice Minister Luiz Paulo Barreto met with Sacha Llorenty, the government minister of Bolivia, in Brazil to negotiate joint actions against the drug traffic.

Barreto said these are medium to long-term actions that should also include Peru and other South American countries. “South America should jointly seek solutions to this problem,” he told Agência Brasil. “And the best way to do this is through cooperation, information exchange, and joint operations.”

According to a study by the Brazilian Institute of Public Opinion and Statistics (Ibope) released last Thursday, 88 percent of Rio residents approve of the war against drug trafficking.

The survey polled 1,000 people from Nov. 27 to 29. The community service hotline received 853 calls from residents in a single day, breaking records since its inception. Police said operations in the slums of the German and Penha complexes have already reduced crime rates by 70 percent in surrounding regions.

A Civilian Police survey shows that more than 20 percent of the population—1.2 million people in 150 communities—live in favelas dominated by drug traffic, and that 100 other communities are dominated by militias composed of corrupt former police and military officers.

Aloysio Santos contributed to this report.