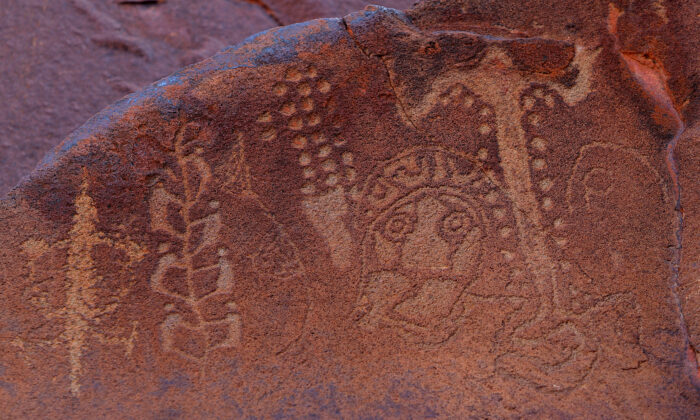 Ancient Aboriginal rock carvings (C) are shown in this photo taken on the Burrup Peninsula in the north of Western Australia on June 17, 2008. (Greg Wood/AFP via Getty Images)
Australia

Mining giant Rio Tinto has apologised for the destruction of an ancient Aboriginal heritage site in Western Australia, admitting several opportunities to stop mining operations in the lead up were ignored. In a submission to an inquiry, Rio Tinto revealed details of its own failings and areas for improvement in its practices.

On May 23, Rio Tinto blew up ancient rock shelters on Puutu Kunti Kurrama and Pinikura (PKKP) country, outraging the traditional owners. An inquiry into the destruction of the 46,000-year-old caves at the Juukan Gorge in the Pilbara region of Western Australia commences on Aug 7.

Rio Tinto Chief Executive Jean-Sébastien Jacques released a statement ahead of the inquiry. “The destruction of the Juukan rockshelters should not have occurred and I have unreservedly apologised to the Puutu Kunti Kurrama and Pinikura people,” he said.

Rio Tinto has said they are determined to ensure this does not happen again.

In 2011 the PKKP listed 16 areas of “high cultural heritage significance” where mining could not take place. It was agreed these sites would be protected. Juukan Gorge was not included on that list.

Within the Brockman 4 development area, the Juukan Gorge pit containing “higher volumes of high-grade ore” was chosen from three others. Consequently, the one chosen was also the only one that would impact the rock shelters.

In 2013 ahead of clearance for mining activity an ethnographic survey was carried out, and further excavations in 2014.

“As a result of these surveys, material new information on the significance of the Juukan rock shelters became available to the PKKP and Rio Tinto,” Rio Tinto’s submission said.

“It is clear that various opportunities were missed to re-evaluate the mine plan in light of this material new information.”

Mining activity did not pause even after the 2018 publication of the Juukan 2 archaeological excavations of 2014, where around 7,000 artifacts were found.

“Several further opportunities were missed at this stage to pause and reflect on whether the agreed plan of ex-situ preservation of the heritage material discovered within the rock shelters was sufficient or whether the rock shelters themselves should be also preserved,” Rio Tinto’s submission said.

Jacques has said strengthening the partnership with the PKKP remains Rio Tinto’s focus and top priority. He will give evidence to the Inquiry on Aug. 7. There have been 52 other submissions made to the inquiry.