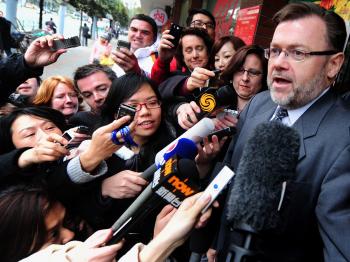 Australian Consul General Tom Connor is surrounded by journalists while making a statement outside the Shanghai Court on March 23, where the diplomatically sensitive trial of an Australian executive of mining giant Rio Tinto was in its second day. (Frederic J. Brown/AFP/Getty Images)
Opinion

“Officials may cheat him, saying if he confesses, even though he didn’t actually commit any wrong, then his sentence will be less,” Chen told The Epoch Times. “It is impossible to have a fair trial in China.”

Stern Hu and three Chinese colleagues were detained in July last year on allegations of espionage and violating state secrets. The charges were then downgraded to those of industrial espionage and bribery following a visit from U.S. Commerce Secretary, Gary Locke, who noted the international business communities’ concern at the shocking arrests and ensuing allegations.

Australian Consul General in China Tom Connor, said in a statement after the first hearing on March 22 that Hu had “made some admissions about two bribes.”

“The defendants then had an opportunity to speak to and address that evidence,” he said.

Chen said the Chinese authorities need a sentence against Hu and his colleagues as it had become a matter of face.

“They have to sentence him, otherwise the victim could turn around and demand compensation,” said Chen. “They will find Stern Hu guilty for sure and the other three. They have to justify the regime’s action against them.”

Rudd has repeatedly stated that “the world will be watching” how the trial is conducted, but the world will not watch the second part of the Rio employees’ trial.

Chinese officials have declared emphatically that it will be conducted behind closed doors without the presence of foreigners, including Australian consular officials.

Former law professor for the Chinese Public Security Bureau Mr. Zhao, who is now an Australian citizen, says closed cases are not unusual in the Chinese courts, but they are reserved for highly sensitive cases on national security.

“They usually occur when the CCP [Chinese Communist Party] does not want to be questioned,” he told The Epoch Times.

According to Beijing lawyer Tang Jitian, the case was in the hands of the politicians. “According to the practice in China, such a highly sensitive case must have the Central Commission for Political and Legal Affairs to co-ordinate or give instructions,” he told News Limited.

Chen Yonglin says there is no rule of law in China as the CCP is above the law. Everyone will have their political instructions on this case, he said.

Hu Can Return to Australia

While Chen says Stern Hu will be sentenced, he believes it is possible that the Rio executive could be back in Australia sooner than people think. It would, however, be up to the Australian government.

“If Australia can put enough pressure, they [Chinese officials] will try to solve it quickly.”
Chinese authorities do not welcome international criticism, he said, so the better the outcome, the better Chinese standing in the eyes of the international community.

Chen believes the Australian government does not understand the importance Australian resources play in maintaining economic growth and therefore stability in China.

They should use the resources as leverage to pressure China on issues of transparency, rule of law, and cases like this, he said.

“I think Rudd should put pressure on Chinese authorities; otherwise, it could turn out negatively for Stern Hu,” he said. “The more pressure, the better results for the detained.”

Chen is not alone in his view. There has been much criticism of the Rudd government for not doing enough to help Hu or to take a stronger stand on issues of principle.

Jerome Cohen, an expert on the Chinese legal system and professor at NYU School of Law shares Chen’s view.

The Australian government has “gone soft” on China’s approach to the case, he told Fairfax News, adding that it “will have disturbing implications for the development of China’s legal system and its treaty obligations.”