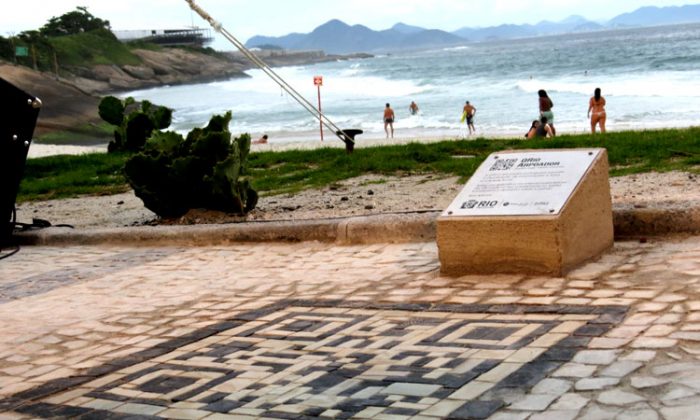 A man tests the QR code at Arpoador Beach, Rio de Janeiro, Brazil, on Jan. 25. It is the first of 30 codes that will appear at tourist attractions in Rio in preparation for hosting the 2016 Olympics. (Bruno Menezes/The Epoch Times)
Americas

RIO DE JANEIRO—As Rio de Janeiro, Brazil prepares to host the 2016 Olympics, the city has launched an innovated approach to help tourists get the most out of their visit: QR code mosaics in the sidewalks at important city sites.

The first of these codes was unveiled at Arpoador Beach at sunset on January 25. The code combines tradition and technology: sidewalks are traditionally made of Portuguese rock, and the first QR codes are designed out of these rocks.

Simply by pointing their smartphones or tablets at the pattern, visitors can instantly learn location-specific information, such as history, photos, tips, and curious facts. By the end of the year, a total of 30 tourist attractions in Rio will have the codes.

“It is a legacy to the city, not only for tourists, who can understand a little about the monuments of the city, but also for the carioca [Rio citizen] himself, who sometimes does not know the history of that site and ends up learning it right there, very fast,” said Fabricia Rosa of public relations agency Grupo Máquina, a private partner in the project. She added, “With the new technology, which is very democratic nowadays, everyone has access.”

The QRio Project is the result of a public–private partnership between the Secretariat of Municipal Conservation and Public Services, and communications and technology companies that are members of Grupo Máquina.

Sidney Haddad, founding partner of digital technology company Zóio, explained that the idea was inspired by designs from similar projects in cities such as Lisbon and Barcelona that have already adopted the code in Portuguese stones.

“We tried to create something with that essence of being cosmopolitan, but with strong cultural roots,” Haddad said. “We propose to map the city with QR codes, meaning that you can access information of that place without needing signs or flyers anymore, but through your mobile device.”

Rosa also emphasized the sustainable nature of the project, which will use recycled materials for future panels. Not all sites have sidewalks, so QR codes will be placed in toughened glass plates instead of Portuguese stone.

Haddad praised the quickness with which the project was adopted, and said there is indication that Mayor Eduardo Paes wants to increase the total sites to 50 by July 2014.

According to data from the Ministry of Tourism, about 2 million visitors from other countries arrived in the city in 2012. Secretary of Municipal Conservation Marcus Belchior said he expects the number of visitors to double this year.

According to Belchior, the project has not cost the city anything so far. “If we pass these 30, there will be a cost, yes, but we are studying the best way to do it,” Belchior said. Funding for the initiative of the first five sites is the responsibility of Grupo Máquina, and the group will seek sponsors for the other 25 tourist sites.

Craftsmanship Behind the Codes

Haddad explained that creating the website that the codes will direct visitors to was an arduous task, as it required “a decent, quick, and succinct content.” But, he tipped his hat to the worker who created the QR code in stone—also a work of great precision.

Gedião Jorge Azevedo, the paving master of the city, has worked for almost 30 years with Portuguese rock. He said the QR codes were a greater challenge than another project, which required paving a sidewalk in the Vila Isabel neighborhood with the notes of a song composed by the famous Brazilian musician Noel Rosa.

“It was very laborious, quite a challenge,” Azevedo said. “It took seven days to complete each QR code. … The pebbles must be two inches a single gauge, no more, no less, or the device cannot read it. I am pleased, and even frightened by all this movement here and the interview requests,” he said.

“The carioca [Rio citizen] is a very rushed kind of person, just looks up, looking for addresses or numbers, but never looks down,” Azevedo said. “If you start looking down and see that you’re stepping on … the details of those beautiful mosaics … that’s a beautiful thing to behold.”