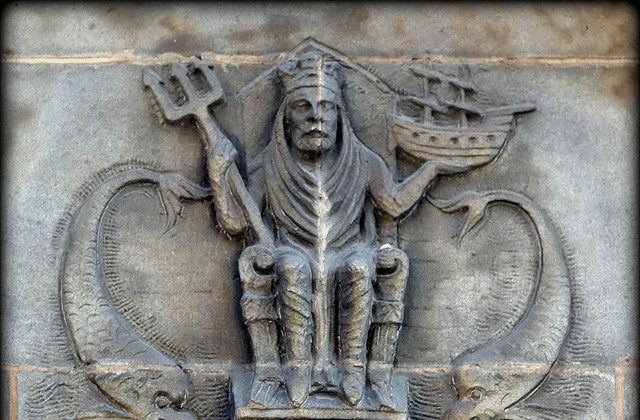 Ring of Skulls: Ancient and Modern Sacrifices to the Water Gods

The macabre discovery of a ring of children’s skulls buried in the earth around lakes in Germany and Switzerland has revealed an age-old tradition of making offerings and sacrifices to the water gods.

Archaeologists from Basel University, Switzerland found the skulls of children forming a protective ring around the settlements in what they believe was a sacrifice to the water gods to prevent disastrous flooding.

The ancient skulls are broken and slashed, displaying the head trauma of suspected axe blows. The researchers said that the children had suffered violent deaths, perhaps due to war, and were buried. Much later, their skulls were retrieved by Bronze Age communities and placed strategically around the settlements to keep the water at bay, as they regularly faced flooding.

These skulls are a rare find. Benjamin Jennings, archaeologist at Basel University told LiveScience, “the remains are found at the perimeter of the settlement — not inside and not outside, but at a liminal position on the border between in and out”, suggesting they were used to protect against rising waters.

Throughout history there has been a belief in water spirits – harmful and benign – in cultures around the globe. Water spirits are often fickle and dangerous in legend, and people who lived near water would leave offerings to placate the gods and ward off disaster. Some of these traditions are still done today.

One of the more commonly recognized deities of water mythology is the Greek god Poseidon (to the Romans he was Neptune). God of seas, water, and earthquakes, Poseidon was known for his foul temper and according to legend he destroyed the Minoan civilization by drowning it with a great tsunami. Ancient mariners would pray and make offerings to Poseidon before setting out to sea.

The name of Amphitrite, sea-goddess and wife of Poseidon, is still used today for good luck and tradition, as navies continue to name their ships in her honor. Naming ships is a centuries-old tradition that stems from superstition of the oceans and of water spirits. This blessing is an effort to protect vessels from harm while at sea.

A sea deity in Celtic mythology, Manannán mac Lir is widely seen in Irish, Scottish and Manx literature. He is named in ballads as the first ruler of the Isle of Man in the Irish Sea, and he is still given offerings of bundles of reeds and yellow flowers in a ritual of “paying of the rent” on the summer solstice. The debt paid, Manannán is said to scare off sea-bound invaders and keep the islanders safe.

Patti Wigington writes in Water Folklore and Legends “For residents of the British Isles, many local bodies of water such as streams and wells were host to water spirits – and often these took on the role of local deity. Historians say it became a popular custom to toss a bit of silver — coins, pins, etc — into a sacred body of water as an offering to the god or goddess of that area.”

Not all offerings to water gods were mere flowers or coins, and not all spirits were concerned with the well-being of mortals.

In legend it was sirens and who enticed sailors with their enchanted singing.  Doomed for listening, the sailors would steer to the sound, crash upon the sirens’ rocks, and drown. Similarly, water nymphs or naiads were dangerous creatures, dwelling in ponds, rivers or marshes. Known for their jealous nature, they would entice men with their beauty and then drag their victims to a watery grave. The mermaid of lore shares many of the characteristics of the sirens and nymphs, but is famously known for her fish tail.

In ancient Greece boys and girls would cut their hair and throw it to the local naiad of the spring in coming-of-age ceremonies. Ritual cleansings were done in the waters to gain the magical medical properties, and animals were drowned in sacrifice to the water spirits.

In Japanese folklore the Kappa is a goblin-like, scaly creature with a bowl-shaped dent in its head filled with enchanted water. Should the water spill out, the Kappa loses its powers. To avoid the pranks or drownings associated with the water spirit, Japanese parents wrote family names on cucumbers and threw them in the water before bathing, in hopes of pacifying the Kappa. This is a tradition still done today.

Such ideas of placating the water gods continue in modern times, as illustrated in an article from The Scotsman. According to the first British Buddhist Lama, “Nessie” of Scotland’s Loch Ness fame is a naga, a water deity that brings prosperity and fertility. It is believed by some that nagas carry the elixir of life and immortality. The Buddhist Lama said Nessie the Naga has a “special magic” and advised that the environment should be protected, and a relationship with the naga should be established for the benefit of all.

The Scotsman notes that tributes to the naga have been made, and “sacrifices have been left to the spirit.”

Dr. William Tuladhar-Douglas, Buddhism lecturer from the University of Aberdeen, was quoted as saying, “There’s about 2,500 years’ worth of history behind a gesture like that.”