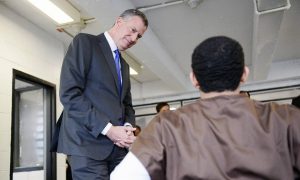 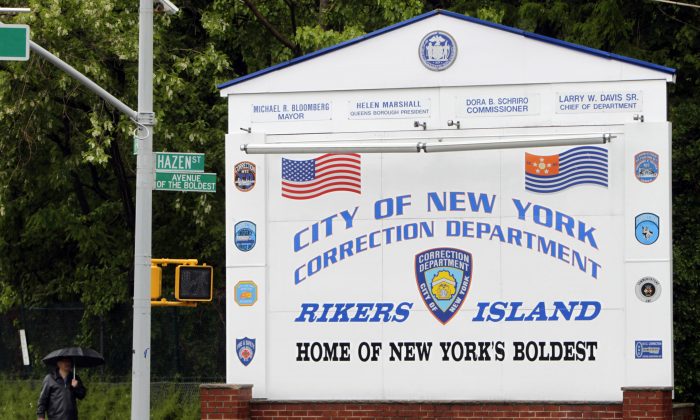 In this May 17, 2011, file photo, a man walks near the sign at the entrance to the Rikers Island jail in New York. (AP Photo/Seth Wenig, File)
New York

NEW YORK—A record number of use-of-force incidents at Rikers Island in 2014 may not mean inmates experienced more violence, according to president of the Correction Officers’ Benevolent Association, Norman Seabrook.

In a phone interview with the Epoch Times, Seabrook explained that the increase in reports is due to a requirement made by the city’s Correction Department to file a report each time an officer makes physical contact with an inmate, regardless of whether the inmate suffered any injuries.

“Any time an inmate is touched by an officer during a course of incident, he must file a use of force report,” said Seabrook.

“If nothing happened to the inmate and the officer, why are you writing the incident report?” said Seabrook, expressing frustration with the increased scrutiny of his officers by the city’s lawmakers. “In my view, it’s redundant and ridiculous,” he said, noting that he believes the issue is “being overplayed to cater to City Hall.”

Any time an inmate is touched by an officer during a course of incident, he must file a use of force report.
— Norman Seabrook, Correction Officers' Benevolent Association

The city’s Department of Correction (DOC) vowed to reform its operations to combat the “deep-seated culture of violence” the federal investigators found at Rikers.

New data obtained by the Associated Press and published on Wednesday appears to suggest that changes are slow to come. Officers used force 4,074 times last year, compared to 3,285 uses of force in 2013.

But while the detailed numbers were not made public, Seabrook has encouraged officers to use pepper spray rather than brute force to break up inmate fights or to subdue an inmate who assaults others.

“It’s more appropriate than for the officer to risk his or her life, getting in the middle of someone holding a razor blade,” he explained.

Speaking to the AP, Seabrook said he told his members: “Don’t physically get into an altercation but use chemical agents. Spray them. Spray everybody you’ve got to spray but don’t punch nobody out. Just spray whoever you’ve got to.”

Use of pepper spray is classified as a Class C use-of-force, with minor or no injuries. Class B incidents are those requiring over-the-counter medical care, and Class A are the most serious, requiring treatment at a hospital.

A January 2008 version of the Department’s policy guidelines on use-of-force noted that “physical contact between an inmate and employee used in a confrontational manner to apply mechanical restraints or to guide the inmate shall not be reported as a use of force.”

The policy also explained that pepper spray is to be used only after an officer fails to de-escalate the situation by talking to the inmate or seeking intervention from mental health staff. If pepper spray fails to subdue the inmate, the officer may then use physical force.

We … expect that in the coming months the rate of uses of force will slow and decline.
— Correction Department statement

While the Correction Department did not respond to a request for comment regarding the new reporting requirement, the agency said it was implementing reforms to reduce “excessive or unnecessary uses of force,” such as new training for staff, updating its use-of-force policy, and ordering 7,800 cameras to be installed in the jail facilities.

“We are confident that the Department is on the right track and expect that in the coming months the rate of uses of force will slow and decline,” the agency said in a statement Wednesday.

Pepper spraying inmates is a fairly common occurrence, said John Boston, director of the Prisoners’ Rights Project at the New York Legal Aid Society. Lawyers at the project litigate on behalf of city and state prisoners.

But other use-of force-incidents have often gone unreported, he added. “In theory, they are investigated. But in practice, the investigation department [at the corrections department] has done a very bad job in recent years. Not much is investigated beyond the captain on the scene, immediately after the incident,” Boston said.

If an officer is indeed found guilty after an investigation and hearing, punishment can range from a reprimanding to getting terminated from the department, but that is a rare occurrence. “Hardly anybody is ever charged, or fired,” said Boston.