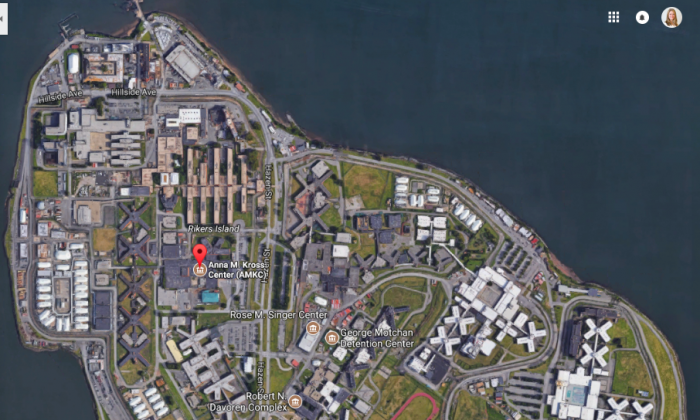 An inmate who tried to escape jail on Rikers Island on July 26 was found early the next day, New York City’s Department of Corrections (DOC) says.

Twenty-four-year-old Naquan Hill, who was being incarcerated on burglary charges, jumped the fence at the Anna M. Kross Center Jail on Wednesday evening at around 7:30 p.m.

It wasn’t until the inmates went back inside and corrections officers did a head count that they realized someone was missing.

The jail complex was put on lockdown while staff searched the island, which is connected to Queens by a narrow bridge. Officials did not rule out the possibility that Hill had crossed the East River and reached the opposite shore.

In a statement, the DOC said the the NYPD, the Port Authority Police, and New York State Police were all involved in the search.

In an effort to keep Hill from escaping over the bridge in a vehicle, officials kept a bus of visitors  on the island for several hours while the search was carried out, WABC reports.

Two corrections officers eventually found Hill near where he escaped. Officers sustained minor injuries while trying to apprehend Hill, and were treated at a local hospital and released the same day.

Hill was also had cuts, apparently from scaling the prison’s barbed wire fence.

It is not clear why Hill decided to go on the lam. He had been at Rikers Island since last December for two counts of second degree burglary charges, a class C felony that carries a minimum of 3.5 years and a maximum of 15.

The Department of Corrections said that after his escape and re-arrest, Hill would be facing additional charges.