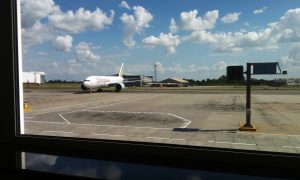 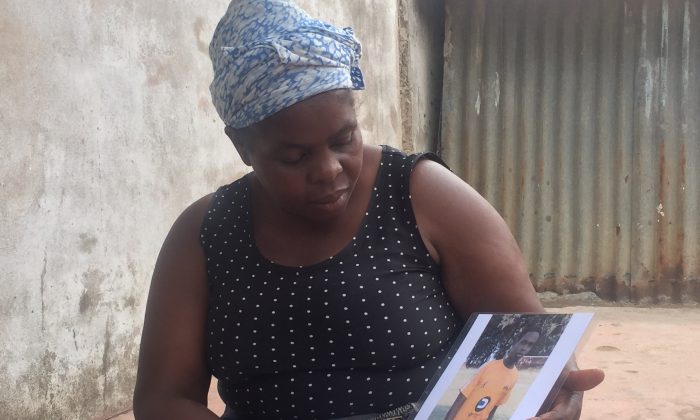 Ellen Juru holds a photograph of her son, Tinashe, who was shot during protests in Harare, Zimbabwe, on Jan. 14, 2019. (Sally Nyakanyanga for The Epoch Times)
Africa

With security forces’ violent crackdown on protesters and a worsening economy, hopes for a better future fade
By Sally Nyakanyanga
biggersmaller
Print

HARARE, Zimbabwe—Sitting on the cracked floor of a now demolished structure outside her home in Harare, Ellen Juru couldn’t hide her grief as she stared at a photograph of her son clad in soccer attire.

Tinashe left home after breakfast that morning and headed to the nearby community shops to hang out with friends.

“We started getting worried when at 7 p.m., he had not come home,” said Juru, 42. “We heard gunshots and stories of someone having been shot at the shops. Little did we know that was our son.”

That was on the night of Jan. 14, when violent protests erupted in Harare and across the country a few days after President Emmerson Mnangagwa announced a hefty 130-percent increase in the price of gas and diesel as a way to deal with fuel shortages.

Juru and her husband, Julius Choto, don’t believe their son was involved in the protests but was simply in the wrong place at the wrong time.

According to a report by the Zimbabwe Human Rights Commission, eyewitnesses confirmed that Tinashe was shot near the local police station during a face-off between the protesters and law enforcement. This incensed the protesters, who attacked the police station.

A similar scenario played out elsewhere. According to Human Rights Watch, in major towns across the country, protesters burned police stations, barricaded roads with large rocks, and looted shops.

Government security forces responded with live ammunition, rubber bullets, and teargas, which they fired at the protesters, as well as into people’s homes.

The Zimbabwe Human Rights NGO Forum says that over the three days of protests, 12 people died and 78 suffered gunshot wounds, while 242 people were assaulted or tortured, some with dog bites. More than 1,000 were arrested, with 400 denied bail.

The Zimbabwe Human Rights Commission (ZHRC) said in a statement that witnesses told them police and armed soldiers visited their homes on the night of Jan. 14 and issued indiscriminate and severe beatings.

“They would arrive at people’s houses at night or in the early hours of the day and ask all men to go outside and lie on the ground. They would then beat all the men, including boys as young as 11, and then ask them to run or arrest them,” the statement reads.

The ZHRC’s allegations and reports of soldiers beating random people in the streets have raised fears that Zimbabwe is backsliding toward the rights abuses that were common during the authoritarian rule of Robert Mugabe, Mnangagwa’s predecessor.

The police and military have denied accusations of excessive force. On Jan. 22, Mnangagwa promised to look into the security forces’ crackdown on anti-government protesters, but Zimbabweans remain skeptical.

After Mugabe was forced to resign in November 2017 and Mnangagwa subsequently became president, Zimbabweans began hoping for a better future. The protests that began on Jan. 14 were about more than just fuel prices—increasing levels of poverty, the poor state of the economy, and declining standards of living have been longstanding problems in the country.

“The will of the people will always succeed … I pledge myself to be a servant,” Mnangagwa told a huge crowd at the ruling party Zanu-PF headquarters in Harare. They had turned out to welcome him back from a brief exile after he was fired as vice president by Mugabe.

“We want to grow our economy, we need peace in the country, and we want jobs, jobs, jobs.”

With unemployment at 90 percent, Mnangagwa’s emphasis on jobs drew cheers from the jubilant crowd.

However, 14 months later, all hopes have been dashed, with the fuel price increase being the straw that broke the camel’s back, pushing people to take to the streets and protest.

Since the last quarter of 2018, prices have been skyrocketing, including public transport costs. Ordinary citizens are finding it hard to send their children to school. Overall, there’s a growing lack of public confidence in the government system. Most agree that Zimbabwe’s economic and political situation needs a remedy sooner rather than later.

Last week, Zimbabwe Council of Churches Chairman Rev. Dr. Kenneth Mtata held a press conference to call for a comprehensive national dialogue, not only among political parties, but for all citizens.

“We want to reach a point whereby we won’t be talking in the years to come about the women and girls raped or sexually abused, if we work together and have a national dialogue,” he said.

Meanwhile, Juru and her husband are left grieving for their 22-year-old son and wondering how they are going to provide for his widow and their 7-month-old baby.

“We didn’t receive any financial support from the government to help pay for Tinashe’s funeral costs. We still owe people money for the expenses incurred, due to the funeral,” Choto said.

He added that Tinashe was a good soccer player and was planning to leave for neighboring South Africa the following week to play for a team there.

“He was a promising young man who was passionate about football and talented as well,” he said.