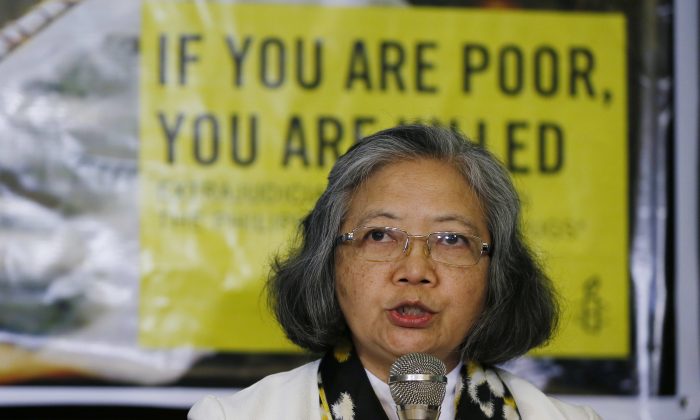 MANILA, Philippines—Most of the thousands of killings of poor suspects under Philippine President Rodrigo Duterte’s anti-drug crackdown appear to be extrajudicial executions and may constitute crimes against humanity, Amnesty International said Wednesday.

The London-based human rights group urged Duterte’s government to adopt an approach that respects human rights in its fight against drugs and crime, and called on the police and judiciary to prosecute officers involved in unlawful killings.

After investigating the deaths of 59 people, the group said it concluded that “the vast majority of these killings appear to have been extrajudicial executions.”

It said it interviewed 110 witnesses, relatives of slain suspects, drug users, police officers and even hired killers from November to December.

The group said it is “deeply concerned that the deliberate and widespread killings of alleged drug offenders, which appear to be systematic, planned and organized by the authorities, may constitute crimes against humanity.”

Duterte’s spokesman, Ernie Abella, acknowledged without elaborating that there have been “extrajudicial deaths,” but said they were not state-sanctioned. He cited a Senate committee finding that the government has no policy condoning unlawful killings and that the anti-drug campaign was being carried out “within legal processes.”

Duterte, a former government prosecutor, has defended the crackdown and says he and his top police officials have authorized law enforcers to open fire only when threatened by suspects.

Police say the deaths of at least 35 policemen and three soldiers prove that suspects have fought back during raids.

Duterte took office in June, and since then more than 7,000 suspects have been killed, including many slain in clashes with police. That is an average of 34 a day, Amnesty International noted. The deaths have alarmed Western governments, including the United States and the European Union.

The rights group said its investigation found in several cases that “witnesses described alleged drug offenders yelling they would surrender, at times while on their knees or in another compliant position. They were still gunned down.”

It cited a police officer involved in the crackdown in Manila as saying that police and hired killers profit from the killings, with some law enforcers getting paid by funeral parlors for each body brought in.

The group said it interviewed two killers involved in the campaign who were paid 10,000 pesos ($200) by a police officer for each execution they carried out, adding they gunned down three to four suspects a week.

On Monday, National Police chief Director-General Ronald Dela Rosa indefinitely stopped all police anti-drug raids and disbanded police anti-narcotics units after the anti-drug crackdown was used as a cover by a group of rogue officers to kidnap and kill a South Korean man for money in a still-unraveling scandal.

The widely publicized scandal prompted Dela Rosa to form a counterintelligence force to cleanse the 170,000-strong police force of criminals and corrupt officers. He has tried to resign twice but Duterte, who has pledged to defend police enforcing his crackdown, has ordered him to stay on.

On Tuesday, the Supreme Court prohibited a group of police officers from entering a slum community to stop them from threatening villagers who have accused the officers of ruthlessly killing four residents in an anti-drug raid.