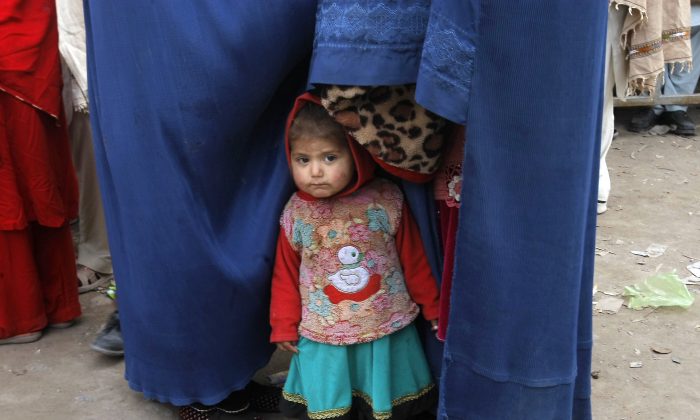 An Afghan refugee girl waits with family members for their turn to register as refugees, outside the government registration office, in Peshawar, Pakistan, on Feb. 8, 2017. (AP Photo/Mohammad Sajjad)
International

PESHAWAR, Pakistan—In a scathing indictment of Pakistan’s treatment of Afghan refugees, a human rights group charged Monday that the country is forcing hundreds of thousands of Afghan refugees back to their homeland, which is still beset by war and crushing poverty. It also said that a $400 stipend the United Nations refugee agency gives to refugees who return to Afghanistan is tantamount to a bribe to convince reluctant Afghans to leave Pakistan.

Both the U.N. and Pakistan denied the allegations. In an interview, Indrika Ratwatte, Pakistan’s country representative for the U.N. refugee agency, said there was police harassment and arrests of Afghan refugees in mid-2016, particularly in the border province of Khyber Pakhtunkhwa but it was ended and refugees who returned, went home voluntarily.

“There were incidences of pressure and harassment especially in KP but they were addressed,” said Ratwatte. “But does it amount to forced return. No. it doesn’t.”

Still, the report was harsh in its criticism of the U.N. agency for not condemning what it insisted is Pakistan’s forced return of the refugees.

Meanwhile, Pakistan cited security concerns for seeking Afghan refugees’ return to their homeland, particularly after several brutal attacks by militants in Pakistan’s northwest, which the government linked to insurgents hiding out in neighboring Afghanistan. The worst attack was in December 2014 against an army public school in which 150 people were killed, most of them children.

Attacking the U.N. refugee agency’s $400 stipend to returning refugees, Gerry Simpson, one of the authors of the HRW report told The Associated Press in an email interview: “What is now needed is not more money to incentivize return to harm, but more money to help Pakistan protect Afghan refugees in Pakistan.”

Yet last year, Afghan President Ashraf Ghani told refugees in Pakistan to come home, promising them shelter and opportunities. About 380,000 registered Afghan refugees returned to their homeland along with an estimated 250,000 unregistered refugees who were living in Pakistan without legal documents, Ratwatte said.

Tens of thousands of returning refugees were settled in a makeshift camp on a barren piece of land in Afghanistan’s eastern Nangarhar province, which Afghan elders in Pakistan described as desolate and dangerous.

“They want us to come back to the desert?” asked Amanullah Nusrat, principal of a school for Afghan refugee children in Peshawar, not far from the border with Afghanistan. “The Afghan government is asking refugees to come back but how? There is no shelter, no water, no security.”

Nusrat’s school, Hazrat Maryam School, is a grimy white single story cement building where about 500 Afghan refugee children sit on the floor in crowded classrooms. Before last year’s exodus there were 800 students, said Nusrat. The others returned to Afghanistan, pushed out by the Pakistan authorities, he said.

Afghan refugees are hostage to the fluctuating relationship between Pakistan and Afghanistan and a sharp deterioration in their relationship last year caused Pakistan to launch a heavy handed push for refugees to return to Afghanistan, said Nusrat sitting in the school’s courtyard surrounded by half a dozen tribal elders.

Most of Nusrat’s students were from Afghan provinces that border Pakistan. Some students had never seen their homeland, and others had returned with their families only to move back to Pakistan because the security made it impossible to stay, they said.

Zarmina, who gave only one name, is a teacher who is originally from Kabul. She said that despite the Taliban’s ouster nearly 15 years ago, it is still dangerous for women, citing a rise in domestic violence in her homeland. She also lamented the increasing presence of the Taliban and the emergence of new militant groups in Afghanistan such as the Islamic State group affiliate, headquartered in eastern Nangarhar province.

“Whenever one group ends fighting, then another group comes up,” she said.

Waqar Maroof Khan, the Pakistan government’s point man on refugees, said the refugees who returned did so voluntarily. Pakistan has also extended the deadline for refugees to return to Dec. 31, 2017. But Human Rights Watch said it should be extended to the end of 2019.

“We want them to go back in dignity and honor,” he said.

Yet Fazle Mulla Tarakai, an Afghan elder originally from Afghanistan’s eastern Kunar province, said last year Pakistan used loudspeakers on mosques in Pakistan’s Khyber Pakhtunkhwa province to tell refugees to go home and to warn Pakistanis that anyone found helping the refugees would be fined.

“In some areas police entered forcibly and refugees left without anything,” said Tarakai.