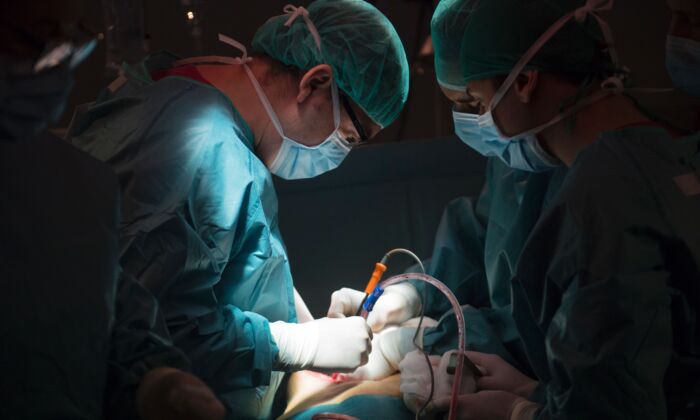 Doctors perform renal transplantation on a patient in this file photo from 2017. (Pierre-Philippe Marcou/AFP via Getty Images)
US

A national legal rights organization has filed the first of what it says will be dozens of lawsuits against U.S. health care facilities that are denying patients organ transplants for not being vaccinated against COVID-19.

In the first complaint—which was filed against the University of Michigan’s transplant center—the Pacific Justice Institute (PJI) argues the hospitals are carrying out illegal and unconstitutional policies by requiring medical treatment against the will of a patient.

“Individuals in the United States have the inherent and fundamental Constitutional Right given by God, not any government board, to seek or to refuse medical treatment or any part of a course of medical treatment,” PJI states in its lawsuit it served on July 5 to the board of regents that oversees the University of Michigan.

According to Dave Peters, senior counsel for PJI, the California organisation will be filing a second lawsuit sometime this week against the Lehigh Valley Clinic in Pennsylvania.

Neither the University of Michigan nor Lehigh Valley Clinic responded to inquiries by The Epoch Times about the litigations.

In a written response to PJI’s notice of intent to sue the hospital dated May 26, the general counsel for the university Thomas Kent stated that “the complaint fails to allege the violation of any clearly established constitutional right.”

In addition to alleged constitutional violations, the lawsuits allege that the hospitals are also violating informed consent laws and the Hippocratic oath of doctors to do no harm to patients.

“They are electing to let patients die  by refusing to provide them with life-saving medical care by forcing a medical care that has no established benefits,” said Peters, “if that’s not morally, ethically, and legally outrageous then I don’t know what is.”

Ross Barranco, one of the patients represented in the Michigan lawsuit, told The Epoch Times that he is opposed to the vaccine for reasons that include the fact he does not believe it safe.

Barranco, who needs a kidney transplant, said the government or hospitals have yet to produce any studies that show otherwise.

“They get compensation for giving you the shots and if you have any damages from the shot they get money for treating you for that—”It’s a win-win situation for the medical industry,” said Barranco.

In spite of his compromised health, Barranco is running for Oakland County Commissioner in Michigan’s 15th District to help he says, “restore people’s right to sovereignty in America.”

Other patients represented in the PJI lawsuits include 35-year-old Katie Shier who is in dire need of a heart transplant.

Shier has just seven percent of heart function remaining and is being kept alive by an implanted Ventricular Assist service.

She was placed on the candidate list for a heart transplant last June, but like Barranco and others—was removed in December after the University of Michigan adopted a policy that all transplant candidates must be vaccinated against COVID-19.

Vaccine or no transplant policies are not just restricted to the COVID jab.

Recently, as reported in an exclusive story by The Epoch Times, Vanderbilt’s Children Hospital denied performing a life-saving heart transplant on 6-month-old August Stoll because he was not up to date on the state’s recommended schedule of vaccines for children under the age of 12.

Deborah Catalano, senior litigation coordinator for Liberty Counsel, which has represented several veterans denied organ transplants for refusing the COVID-19 vaccine,  told The Epoch Times that she now has an unvaccinated client who is being denied post-op care for a kidney transplant she had before the vaccine existed.

Hospitals have said they are following recommendations set by national transplant organizations, some of which have strong financial ties to makers of vaccines including the COVID-19 vaccine.

The American Society of Transplantation (AST) and United Network of Organ Sharing (UNOS), for example, list vaccine manufacturing giant Sanofi—which partnered with both Pfizer and Johnson & Johnson to produce the COVID-19 vaccine—among their corporate sponsors.

UNOS receives 10 percent of its funding from the federal government, which heavily promotes the COVID-19 vaccine.

Peters told The Epoch Times that his organization is prepared to take the hospitals denying life-saving transplants over a patient’s vaccine status all the way to the U.S. Supreme Court if need be.

Legislative efforts are also underway in several states to ban the practice of hospitals refusing to perform organ transplants on patients that are not vaccinated.

In May, a mother filed a federal lawsuit against the DeVos Children’s Hospital in Grand Rapids, Michigan, for requiring her 17-year-old daughter, who has stage three renal failure, to have the COVID-19 vaccine before performing a kidney transplant.