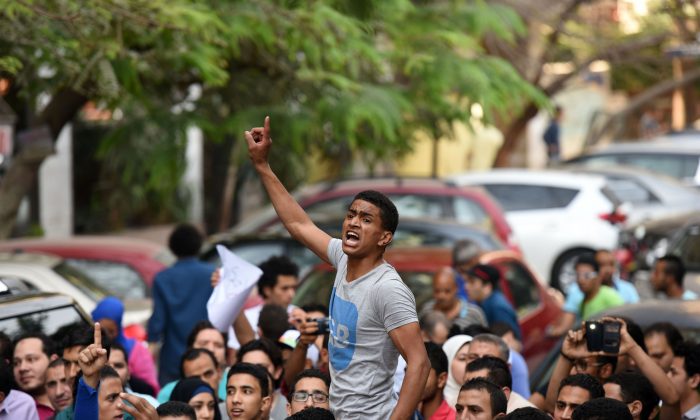 Egyptian protesters chant slogans during a demonstration in Cairo on April 25, 2016, against the handing over of two Red Sea islands to Saudi Arabia. (Mohamed el-Shahed/AFP/Getty Images)
Middle East

Rights group Amnesty International has accused Egypt of “paranoia” in its crackdown to prevent protests the previous day against President Abdel-Fattah el-Sisi’s government.

On Monday, April 25th, police fired tear gas at protesters in Cairo who defied government warnings and staged a rally calling for the “downfall” of the regime.

Around 50 activists, including leading leftist dissidents, gathered suddenly at a city center square. Rocks were thrown at police who responded with tear gas.

Police chased down people and arrested them, filling three vans with detainees, including several journalists.

Ahead of the protest, police had arrested dozens of activists.

“Egypt’s security forces arbitrarily arrested hundreds of people ahead of planned protests” on Monday, Amnesty said in a statement.

“The Egyptian authorities appear to have orchestrated a heavy-handed and ruthlessly efficient campaign to squash this protest before it even began,” Magdalena Mughrabi, Amnesty’s deputy director for the Middle East and North Africa, said.

“Mass arrests, road blocks and huge deployments of security forces made it impossible for peaceful demonstrations to take place.”

Amnesty quoted a local activists’ group as reporting the arrests of “at least 238 people, including foreign nationals, activists and journalists.”

Sisi and his interior minister, Magdy Abdel Ghaffar, had warned on the eve of the planned demonstrations that security forces would deal firmly with protesters.

A coalition of leftist and liberal groups had called the protest, ostensibly against the handing over of two Red Sea islands to Saudi Arabia.

But in a country where most protests are banned, the gesture was aimed more at defying what activists call Sisi’s heavy-handed rule.

AFP journalists said relatives of detained people crowded police stations in central Cairo on Tuesday trying to find out information about them.

“Sadly, crushing freedom of peaceful assembly and violating other rights is entirely in keeping with the Egyptian government’s response to any kind of criticism,” Mughrabi said.

“The authorities say they are restoring stability and security, but their paranoia has created a real blind spot and appears to have rendered them incapable of distinguishing between peaceful demonstrations and genuine security threats.”

AFP tried several times in vain on Tuesday to contact the interior ministry’s press service and spokesmen for a reaction to the Amnesty statement.

Amnesty said many of those arrested in the four days preceding the protest “have been remanded in custody on multiple charges, including breaching the counter-terrorism law.”

Sisi was adulated by millions of Egyptians who opposed Islamist Mohamed Morsi, the country’s first freely elected president, whom the army ousted in 2013.