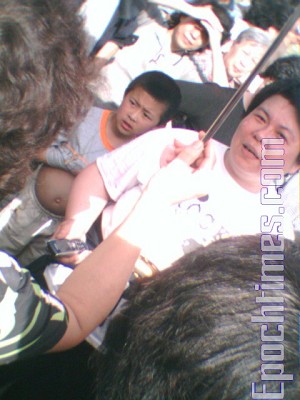 Zhou Li's rights defense consultation is highly welcomed by Beijing residents. People are holding an umbrella for her and offering her drinks on the scene. (The Epoch Times)
China

On May 13, 2007, Beijing rights defender Zhou Li offered a free rights defense consultation to local residents on matters related to forced relocation due to building demolition projects. The consultations took place in Beijing at an open space near the residence of Liu Fengchi, an evicted household. According to an eyewitness, roughly 1,000 people went there for the service, including human right defenders such as Ye Guoqiang, Liu Anjun, and Ma Jiemin. Zhou's two-hour consultations were incredibly popular with local residents, from whom she gained great praise. However, at 5:30 p.m. that day, after arriving home, Zhou was arrested and sent to Beijing's Tiyuguan Road Police Station.

Zhou Li mentioned that at about 3 p.m., upon her arrival at the open space in front of Liu Fengchi's residence, police forcibly confiscated her banner, loudspeaker and the materials to be given away. The police also warned Zhou Li that what she was doing was subject to charge of illegal assembly. Ms. Zhou replied to them that it was entirely legal for her to promote protection of legal rights.

As more people gathered, more people became infuriated by the police's action against the gathering. Zhou Li said, “Because too many people were there, the police didn't dare to take action to disperse the crowd. Over 30 policemen could do nothing but idle under the shade of trees.”

A Beijing resident surnamed Qu told our reporter that since common people knew little of the law, they were very pleased to take the opportunity to learn something through the counseling. Many were surprised to find out that a lot of the Chinese communist regime's enforcement was actually illegal, including forcibly taking away people's information materials and destroying people's banners.

After the consultation came to an end at about 5 p.m., Qu together with over 100 other people escorted Zhou Li home for fear that she might be arrested by the police. Zhou Li expressed that being escorted home by so many people was beyond her expectation, and that she was really touched by their heartfelt warmth.

However, after the crowd went home, four policemen arrived at Zhou's home and took her away at about 5:30 p.m.

When our reporter called Zhou at 5:39 p.m., she replied that she was detained in Beijing's Tiyuguan Road Police Station and was surrounded by 12 police officers. She was summoned by the police on the charges of “disturbing order at public places.”

Faced with the Chinese authorities' persecution, Zhou reiterated, “I don't care. I have prepared for the worst. Seeing over 100 people escorting me home, with someone was holding an umbrella for me and others offering me drinks, I feel that it is worthwhile doing the whole thing. Really worthwhile.”

Our reporter's telephone interview with Ms. Zhou came to a disturbing end when she shrieked, “The cop is robbing my cell phone!” Following this, the call was immediately disconnected, and the phone has been off since that time.

Ms. Zhou Li, 37, an unmarried resident in Beijing, was once forcibly evicted. Her father used to be a senior member of the Chinese Communist Party (CCP), but later the CCP demanded his expulsion from the Party due to his support for the June 4th Movement.