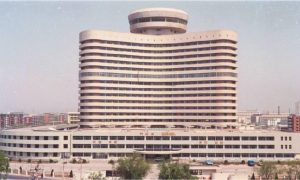 Re-enactment of organ harvesting in China on Falun Gong practitioners, during a rally in Ottawa, Canada, 2008. (Epoch Times)
Canada

Human rights advocates are calling on MPs to pass a Senate bill that makes it a crime for Canadians to get organ transplants abroad using organs extracted without the donors’ consent, and would ban those complicit in organ trafficking from entering Canada.

Speaking at a webinar on June 16, rights activist and former MP David Kilgour stressed the importance of taking action to pass Bill S-204, especially given his own research on how China conducts state-sanctioned organ removal from prisoners of conscience.

“There’s only one government in the world that is killing its people, prisoners of conscience [for their organs], and that’s the government of China,” Kilgour, Canada’s former secretary of state for Asia-Pacific, said during the webinar, which was organized by the International Coalition to End Transplant Abuse in China (ETAC).

“[Of] the hundred or two hundred … other countries in the world … there’s only one on the face of the earth today that is doing this horrendous crime against humanity,” Kilgour said.

Kilgour and human rights lawyer David Matas co-authored a report (pdf) in 2006 that confirmed reports that Falun Gong adherents were being killed in China for their organs.

Bill S-204 passed unanimously in the Senate on May 6, and was tabled for the first reading in the House of Commons on May 10 by Conservative MP Garnett Genuis.

However, Matas worries that a possible fall federal election would dissolve the current Parliament before there’s a chance for the bill to become law.

Similar legislation against organ transplant abuse has been previously proposed in the Parliament, including by Liberal MP Borys Wrzesnewskyj in 2008, Liberal MP Irwin Cotler in 2013, and Conservative Sen. Salma Ataullahjan and Genuis in 2017. Although the bills had the support of all parties, they didn’t get passed into law before the parliamentary session was dissolved.

“This manner of proceeding is both a tragedy and a farce. It is a tragedy for those being killed for their organs and their families, [and] the behaviour of Parliament is a farce,” Matas said.

“No one in the current Parliament has expressed any opposition to this bill. What we are asking for is only a few seconds of House of Commons time so that the apparent unanimous support that the bill has in the House of Commons can be formally recorded, and the bill, 15 years after our report noting the legislative gap, 13 years after the Bill was first introduced into Parliament, can finally become law.”

Since the report by Kilgour and Matas came out, China’s organ harvesting has expanded from targeting Falun Gong adherents on a large scale to also claiming other victims in large numbers, including Uyghur Muslims.

“There are countless numbers of Chinese citizens that are culled out of the herd of people who are have been kept alive and fed and watered, just waiting for a computer selection matching their tissues with somebody from a foreign country that has the money to pay $65,000 for a kidney,” Clive Ansley, lawyer and member of the ETAC Canadian Committee, said at the webinar.

Matas said China’s organ trade has been a “hugely profitable enterprise,” generating an estimated $6 billion to $7 billion revenue for Chinese hospitals, medical personnel, pilots who transported the organs, and brokers who solicit patients in countries like Canada.

Grace Wollensak, a representative from the Falun Dafa Association of Canada, said that Canadian tourists to China are among the top organ buyers in the world, quoting a report from Organs Watch, a California-based nonprofit group.

“China’s transplant system, which has the capacity to conduct 50,000 to 90,000 transplants per year, has been and continues to be supported by the killing of innocents. It is driven by the state, run on an industrial scale,” Wollensak said.

In 2013, NGO group Doctors Against Forced Organ Harvesting initiated a global petition to the United Nations Office of the High Commissioner for Human Rights (UN Human Rights), collecting 1.5 million signatures from people in over 50 countries within five months. The petition asked the high commissioner to call for “an immediate end of forced organ harvesting from Falun Gong practitioners in China.”

Kilgour said there’s been no response from the Office of the High Commissioner for Human Rights in Geneva to date.

In a statement released on June 14, 2021, the UN Human Rights stated that it is “extremely alarmed” by organ harvesting allegations “targeting minorities, including Falun Gong practitioners, Uyghurs, Tibetans, Muslims and Christians, in detention in China.”

Wollensak said, “On behalf of the victims, I’m calling for all MPs to support this life-saving bill to pass as quickly as possible.”