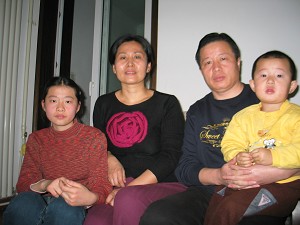 CHINA—Renowned human rights attorney Gao Zhisheng faces the charge of “instigating subversion of state power” without his defense attorney, who is barred from discussing the case with him. Police also continue to harass Gao's wife and children daily.

In an interview by The Epoch Times , Mo said: “After learning about Gao's formal arrest on September 21, we once again sent a letter to the police to request a meeting with Gao, but until now, we have not received any reply at all.”

Mo also pointed out that since the so-called “instigation act” was enacted, this must be an open process, “instigating subversion of state power” should not involve any national secrets and thus the police should not reject his request for a meeting under the pretext that it “involves state secrets.”

He said that he would further negotiate with the relevant departments to meet with Gao as soon as possible.

In an Epoch Times interview, Beijing human rights advocate Hu Jia said that Gao's wife Geng He, and daughter Gege, are miserable beyond words—it is as if they are in prison.

Hu has learned through reliable sources that policemen are stationed below Gao's apartment and it is obvious that there are over a dozen policemen, many in plainclothes and in unmarked vehicles. Geng He has been placed under house arrest since Gao's arrest. She cannot come and go freely or make contact with the outside world.

Hu said, “Geng is under tremendous mental pressure and often weeps in sorrow. Sometimes she is on the verge of a mental breakdown. She is very confused. On one hand, she hopes for outside help, yet she is afraid that this may have an unfavorable influence on Gao's case.”

According to Hu, Gao's 13-year-old daughter Gege, is currently in her second year of secondary school. Everyday, the police escort her to and from school. Since Gege escaped on August 26 and exposed her predicament to the outside world, the authorities have strengthened their surveillance over her. A male and three female police officers follow her side by side; they often abuse her in various ways, including mocking and making degrading insults. They even lock her in the car to make her late for school. When Gege is in class, they stand outside and stare at her through the classroom window. Wherever Gege goes, they follow.

Hu further stated, “Gege's teacher has also become very strict with her. Police told the teachers and students that her father was a political prisoner. At first, Gege's school mates kept a distance from her, later on, they witnessed the police's unscrupulous behavior and changed their attitude towards Gege and even were willing to help her when possible.”

Gege could not bear the torment any more and found an opportunity to call Hu Jia on October 21. She complained in tears again. Hu said, “Gege is really pitiful, suffering from this kind of abominable treatment at such a young age. She has not seen any of the letters that I wrote to her and sent to her school. Her teacher has given them all to the National Security Bureau and they complacently waved the letters in front of me.”

It has been over a hundred days since July 17, when Hu Jia was placed under house arrest. Several plainclothes policemen watch him around the clock.

He said, “It is too inhumane for the police to treat them this way! Once I regain my freedom, the first thing I want to do is to visit Geng He and take Gege home from school.”

Hu said, “The situation inside China is very harsh. It is very dangerous to visit Geng He but hopefully friends in more favorable conditions might consider going to Gao's neighborhood pretending to be a passerby and take a look at the situation and be a witness to history. U.N. officials, and diplomats from other countries should also consider calling on Geng He and the children to show concern for their predicament. What they do will exert pressure on the Chinese communist regime.”