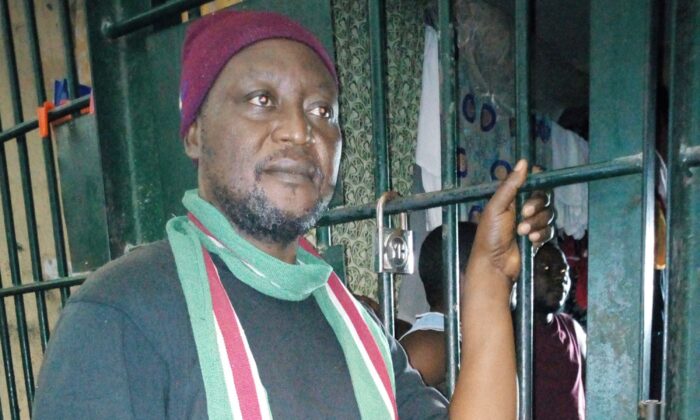 On Nov. 15, the 40th anniversary of the Day of the Imprisoned Writer, a petition to U.S. Secretary of State Antony Blinken is calling for his help to free a Nigerian contributor to The Epoch Times. The Tom Lantos Human Rights Commission also will hold an event to call attention to the arrest of journalists.

Luka Binniyat was arrested on Nov. 4 in Kaduna, Nigeria, and charged with “cyberstalking” under a statute denounced by critics as intended to silence opposition journalists.

Binniyat, 52, was charged on Nov. 9 in a Kaduna magistrate’s court with cyberstalking the Nigerian commissioner of internal state security, Samuel Aruwan, for a report published by The Epoch Times that revealed that no arrests or prosecutions had ensued a month after a massacre of unarmed Christians in a village in southern Kaduna state on Sept. 26.

Cyberstalking is defined in Nigerian law as “the act of threatening, harassing, or annoying someone through multiple email messages, as through the Internet, especially with the intent of placing the recipient in fear that an illegal act or an injury will be inflicted on the recipient,” according to ResearchGate.

Nina Shea, the chief religious freedom scholar at the Hudson Institute, told The Epoch Times: “It’s preposterous that Kaduna state’s powerful security commissioner is claiming to be a victim of ‘cyberstalking’ by a small-town reporter based on an article he wrote for an American audience.

“Nigeria’s federal crime of cyberstalking is defined essentially as making someone feel ‘annoyed’ over something sent over the internet and was aimed at the notorious Nigerian phishing attempts. The charge that the security commissioner is the victim in this case is transparently trumped-up and far-fetched and intended to insulate him from even the mildest media criticism.”

Shea pointed to a study by Lagos State University legal scholar Abiodun Ashiru that established that the cyberstalking provision is a “legal restriction on the right to freedom of expression in Nigeria.”

The petition to Blinken, who plans to visit heads of state in Kenya and Nigeria this week, calls upon the secretary of state to request that Nigerian President Muhammadu Buhari reconsider the prosecution of a reporter who is informing Americans about national security matters.

“Save the Persecuted Christians, a large coalition of human rights advocates, calls upon you during your visit to Nigeria this week to express grave concern to the Nigerian government about the egregious violations of speech and press currently taking place in Nigeria, as well as that government’s abject failure to provide protection and justice to Christian communities repeatedly targeted in murderous attacks by aggressive Muslim Fulani herdsmen,” according to the petition undersigned by Dede Laugesen, executive director of Save the Persecuted Christians.

“The arrest and unjustified detainment for ‘cyber stalking’ of Mr. Luka Binniyat, a contract journalist for a U.S.-based news organization and an internationally respected voice for persecuted believers, is only the latest example of journalists being imprisoned on ludicrous and trumped-up charges.

“Binniyat joins the growing ranks of journalists unjustly detained for reporting on rampant religious-based violence in Nigeria and calling out the inept officials who refuse to acknowledge victims of these atrocities and to prosecute those responsible. International pressure to release Binniyat should be swift and severe.

“The abuse of Binniyat’s universal human right to freedom of expression and opinion will only serve to further mute the voice of independent journalists conducting vital reporting on rampant religious-based violence in Nigeria. The detainment of Binniyat who was at the time writing for an American audience is a blatant effort by Nigerian officials to curtail the agency of free press in the United States and hinder the sharing of information critically needed by the West to ascertain and appropriately address the full extent of persecution in Nigeria, America’s most important partner in Africa.”

Laugesen said the petition, posted Nov. 12, is getting a “good response.”

Shea is among the growing list of critics calling for Binniyat’s release. “This case is intended to silence a reporter and distract attention from the serious subject of his reporting. The court should immediately release Luka Binniyat and drop these frivolous yet destructive charges,” she said.

The arrest of Binniyat has been covered by The Epoch Times, Sahara Reporters, and The Christian Post—all publications based in the United States—but by less than a handful of newspapers and no TV channels based in Nigeria itself. By contrast, Binniyat’s arrest and trial for defamation in 2017, when he was a bureau chief for Vanguard News, was widely covered by the Nigerian press.

“Most Nigerian media refuse to report on the proceedings for fear of the government’s retribution,” Kyle Abts, executive director of the International Committee on Nigeria, wrote to The Epoch Times.

Also coinciding with the anniversary of The Day of the Imprisoned Writer,  the Committee to Protect Journalists called for authorities to release Luka Binniyat and to reform its Cyberstalking statute.

The CPJ further quoted Quintal: “Disputes over reporting should be settled in ways that avoid the jailing of journalists.”

In a development relevant to the Binniyat arrest, the Tom Lantos Human Rights Commission will hold a webinar briefing on Nov. 15 at 3 p.m. EST on the wrongful imprisonment of journalists, writers, and scholars around the world. This virtual briefing, co-hosted by Reps. James P. McGovern (D-Mass.) and Christopher H. Smith (R-N.J.), will be open to members of Congress, congressional staff, the interested public, and the media. To attend, please register here.

The hearing will combine the research of two organizations—PEN America and Scholars at Risk—to raise awareness of the increasing number of writers and thought leaders jailed for expressing themselves. The three groups have documented that the number of imprisoned journalists and writers has substantially increased in the past two years.

UPDATE: Comments were added to the article from the Committee to Protect Journalists and the list of organizations taking part in the Tom Lantos Human Rights Commission webinar was corrected, at 3:50 p.m. ET on Nov. 15, 2021.